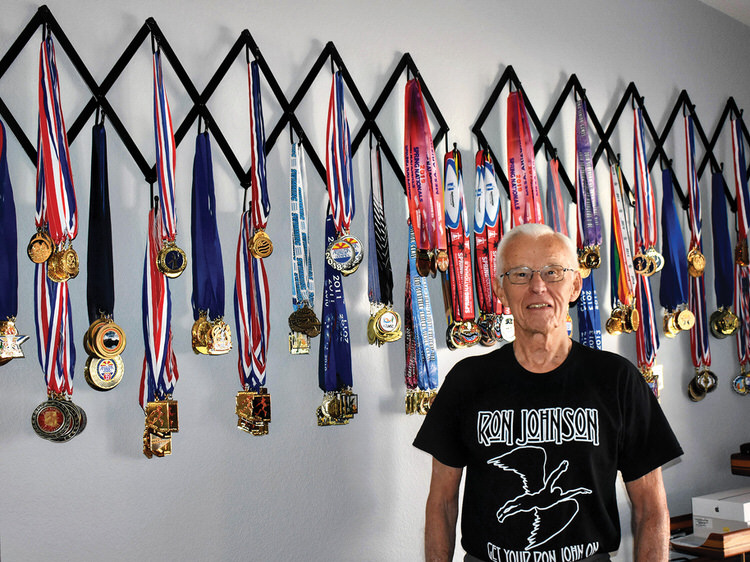 Mornings at the Fitness Center lap pool are distinct with the sound of the pool water cut by a swimmer and his breath as he completes his daily mile swim.

Al Worth is a longtime resident of IronOaks. Twenty-three years ago when he moved in and his key entered the lock, he also found the pool. Initially, swimming was casual and for staying in shape. Post his high school junior year on the swim team, Al rarely thought of ever swimming competitively. His wife Cheryl saw something different and encouraged him to take his swimming to the next level. Not knowing what to expect and how “good” other swimmers were prevented him from taking the leap. Barb Blish, a fitness instructor at the time, also suggested he should compete. The final push was all that was needed, and his competitive career blossomed.

At this point, readers are saying, “Well, good for Al! He is healthy, competes, and has won awards.” This isn’t the end of Al’s journey, though. Most would say this isn’t even the highlight of Al’s journey.

Two years ago, just prior to COVID-19 leaving us homebound, Al experienced something he hadn’t before—a subtle decrease in his energy. A visit to his doctor this past February proved to be fateful. He was diagnosed with congestive heart failure. With his heart only pumping 15% of the oxygen-rich blood through his system, he was left with zero energy and not much hope to swim competitively again. Nine days in the hospital, fitted with a new pacemaker, and a doctor telling him he didn’t hold out much hope and to get his personal life in order, Al did just that. Most people, at this point, would have found a comfortable chair and a cozy blanket and relaxed. For a moment, Al did, too, but swimming was undeniably a passion, whether it was to compete or just for his own mental wellbeing. Al jumped back in the pool. Slowly at first, barely able to complete a lap. Returning day after day to get a few strokes further and slowly building stamina to complete a full lap.

Fast forward to last month, competing in the Ron Johnson Invitational meet in Tempe, Al competed in six events: three individual events, the 50, the 100- and 200-meter races, and three team relay events. Not only did he win medals, but he placed first in all his races. Achieving Best Time Ever in the 50-meter awarding him a national award on top of the three individual All American awards!

Going forward, Al will continue to race with the support of his wife Cheryl, four children, five grandkids, and eight great-grandkids, none of whom swim, ironically enough. He looks forward to the Polar Bear meet, Senior Olympics, Green Valley swim meet, and the State Senior games in the next two months.

Not bad for someone 86 years young, diagnosed with congestive heart failure.