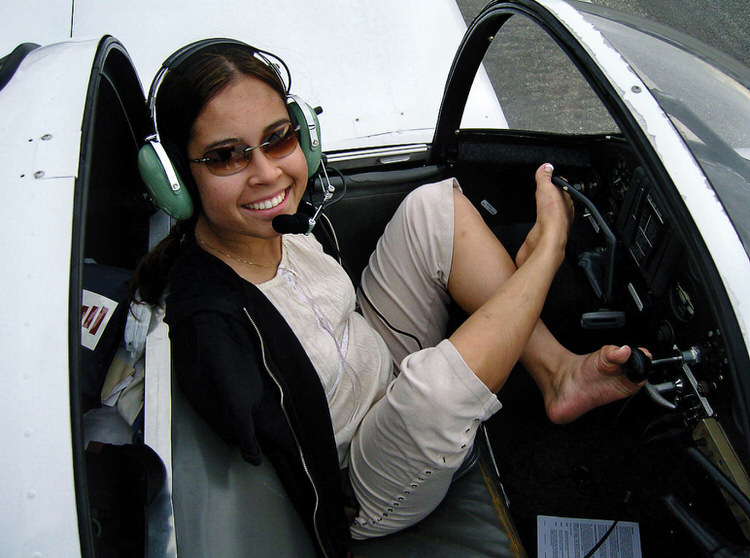 Born without arms, Jessica Cox earned a Sport Pilot certificate in an Ercoupe 415C. Sitting cross-legged, she works the throttle with her left foot and works the yoke with her right foot. Cox will relate her flying experiences during a presentation to the Sun Lakes Aero Club on Monday, Jan. 17.

Jessica Cox, the first armless woman to receive a pilot’s license, will be the featured speaker at the Sun Lakes Aero Club (SLAC) gathering on Monday, Jan. 17, at the Sun Lakes Country Club Navajo Room. The meeting begins with a social hour at 6:30 p.m., followed by Cox’s presentation at 7 p.m. The public is invited to attend.

This will be Jessica Cox’s third appearance at a SLAC gathering, dating back to 2009 when we first learned of her amazing story. Born without arms, she always draws a large crowd with her story about how she overcame her handicap.

In addition to earning a pilot’s license, her accomplishments include driving a car, typing 30 words per minute, swimming, scuba diving, and even changing her contact lenses. She earned a degree in psychology from the University of Arizona and has two black belts in Taekwondo. Today she is a professional motivational speaker who has made more than 300 presentations throughout the nation and around the world.

The daughter of an American music teacher and a Filipina nurse, Jessica hasn’t let her handicap stop her from doing with her feet most things people do with their hands.

But it is her accomplishments in aviation that has our attention at SLAC. Interestingly, Cox had a lifetime fear of flying, a fact she mentioned from the podium during a presentation to a Tucson Rotary Club many years ago. A pilot in the audience offered to take her for a ride. She took him up on the offer, and on Oct. 21, 2005, she experienced flight in a light plane for the first time, even taking the controls of the Cessna 172 for a few minutes. That experience changed her life.

She took a few lessons in the 172, but would be unable to solo the aircraft because of her physical limitations. It was impossible for her to manipulate the control yoke, rudder, and throttle at the same time.

Only one aircraft would allow her to meet her new goal—an Ercoupe 415C. This aircraft is unique, because it has no rudder pedals and can be controlled by a single yoke. After a lengthy search, Cox located not one but several 415Cs at the San Manuel Airport, just 50 miles from her home in Tucson.

Sitting cross-legged in the Ercoupe’s cockpit, she works the throttle with her left foot and the control yoke with her right foot. She completed her first solo on May 11, 2008. Five months later, she took her checkride and qualified for her sport pilot certificate. This certificate allows pilots to qualify medically with only a state-issued driver’s license.

Additional information on Jessica Cox is available on her website jessicacox.com.

SLAC meets the third Monday of each month, November through April. For more information on SLAC, visit the club’s website sunlakesaeroclub.org or call Cannon Hill at 509-298-7857 or Gary Vacin at 480-298-7017.