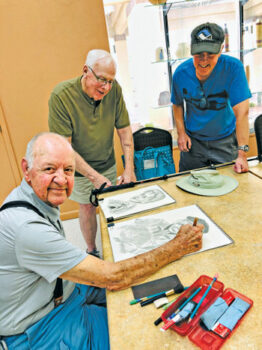 The Desert Artists Club (DAC) is proud to feature one of its members who moved from California to Sun Lakes in 2018 and joined the DAC. Ted O’Canna is a self-taught artist. Over the last 40 years, he perfected his own style by taking photos of various places and people he met while traveling the world for business and pleasure. He transferred the likenesses to paper and canvas, in both pastel and oil paint. He has also used subjects in various magazines, newspapers, and National Geographic. He even copied a shepherd girl he saw pictured on a large metal container of olive oil in a supermarket.

Even though his efforts were primarily for his own enjoyment and self-satisfaction rather than sales, he has sold many of his works over the years. Since relocating to Sun Lakes, he concentrated on using a very dark graphite, primarily drawing interesting human subjects.

Over the years, he has instructed others in his pencil techniques, many of whose works are outstanding examples of fine art. He continues to sketch on an almost daily basis and derives a great deal of satisfaction based on the images he creates.

Ted will be relocating to Washington State soon and has generously chosen to donate many beautiful framed oil paintings to Matthew’s Crossing. All proceeds from their sales will go directly to the charity. We will surely miss our friend and fellow artist but feel honored to have learned and been inspired by him. We are so grateful that he was part of the Desert Artists Club here in Sun Lakes. The July 2021 Splash featured one of Ted’s pastels.

The Desert Artists Club meets each Tuesday afternoon from 3 to 6 p.m. in the Ceramics Room (A-8) in Cottonwood. If new to Sun Lakes, you may contact me at [email protected] or 480-745-2198, and please leave a message.