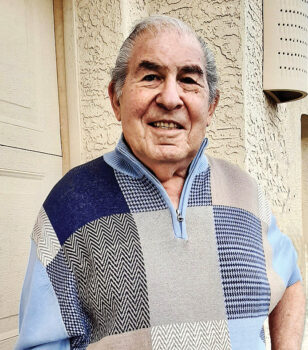 I knew that I wanted to try something new

But just wasn’t sure what I wanted to do

So off to this meeting I went with a friend

Met this man Fred and that was the end

The end of my wondering cause he said sign here

So into his lap class I went with some fear

The man’s twice my size and ten times as smart

He could grind stone right into a heart

So gentle and kind and patient indeed

Taught us to saw so we wouldn’t bleed

Make sure the back is flat and is level

Make sure no dents are left in your dome

Polish that cab before you go home.

Time to pack up he says with a smile

Get it “Ship Shape” we need it real clean

Go “Swab the Deck” we want a bright sheen

Clean up the saws and sponge off a grinder

When you take leave sign out in the binder

Fred has taught lap class for many a year

All of his students think he is a dear.

The motivation to take up residence in Sun Lakes, like most, was avoiding winter weather and, in Fred’s case, the hospitality of the Oakwood Murphy’s, relatives whom they frequently visited in Arizona. Fred and his wife Gelene have been snowbirds for 14 years; their permanent residence is Arlington, Va.

Fred grew up in Queens, N.Y., where he avoided truancy by attending all required public schools and then on to New York University, where he earned a B.A. degree in economics. Mandatory military service, better known as the “Draft,” was in effect in 1953, and he qualified. But preferring blue to khaki, he volunteered, was sent to school, and in 1954 was commissioned as an ensign in the U.S. Navy. The sea stories are endless and could fill a book. He became a retired Navy Captain in 1984, having served aboard eight ships (a carrier, five destroyers, and two cruisers), cleaved the waters of oceans and seas as well as fulfilling assignments ashore, mostly in Washington, D.C., including the Pentagon.

The most significant event of Fred’s life occurred in 1965. Ignoring the unwritten Navy axiom (if they wanted you to have a wife, they’d issue you one), the enchanting Gelene Mitchell of Grinnell, Iowa, accepted his marriage proposal. He shares that “Our anniversary is a nationally familiar date, with flags flying everywhere. We storied our three children (a daughter and two sons) that everyone is celebrating our anniversary. Our six grandchildren give us the same skeptical looks regarding this fabrication, as did their parents.”

Ten years ago, Fred purchased a home in Sun Lakes, and he and Gelene joined the Sun Lakes Rock, Gem and Silver (SLRGS) Club. His first class was Lapidary, followed by Handles, Bears, and Minerals (Geology). He enjoyed Lapidary, and as he developed more knowledge, experience, and confidence, became an instructor. Fred has also become proficient in Lapidary equipment maintenance. This summer, because of the pandemic, Fred and Gelene remained in Sun Lakes. Fred spent time relaxing, reading, and polishing golf clubs. Hopefully, they will be able to return to Virginia in the late spring. Both Fred and Gelene are long-term contributing members of the SLRGS Club. Check out our website at www.slrgs.com.