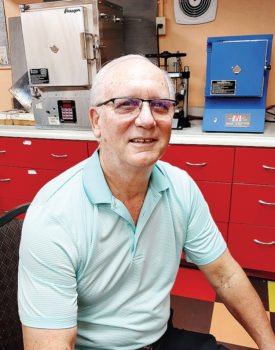 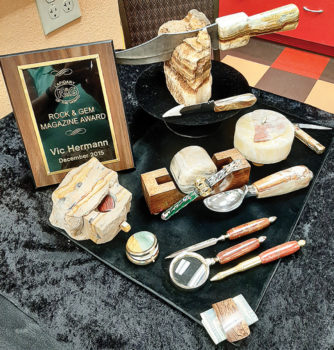 Can make you a box or a puzzle or knife

Discovered this talent in his later life

He tells us that “anything made out of wood

Can be made out of stone.” He knew that he could.

Would make a stone chicken if he had a coop

Cut onyx in half glue together again

With a path for a rod, now you’ve got a pen

This man is creative, thinks outside the box

To hang on his wall, he’s made some stone clocks

Vic’s serving the club in so many ways

And enjoys what he’s doing. It fills up his days.

Vic Hermann is our August Artist Who Aspires to Inspire, and he does just that. He discovered his talent in the area of lapidary in 2006 after taking a field trip with the Sun Lakes Rock, Gem and Silver Club with his wife who was a club member. He began by taking a Lapidary I class learning to make cabochons, followed by a class learning bears and bookends. With his creative mind, he dreamed up various techniques to make handles for letter openers and pens. His talents were immediately recognized, and he was recruited to teach his skills to others in the club. In 2015, Vic won an award from Rock & Gem Magazine for his presentation and instructions on creating an onyx stone ice cream scoop. He enjoys working with onyx; the medium hardness, color variations, and high-shine polish make for beautiful projects.

Vic shares that “handmade gifts are really appreciated by the recipient. Something as easy and simple as a handmade stone heart presented with love will bring a smile and become a cherished memory of a one-of-a-kind gift. I donate many of my projects because to sell them would seem more like work rather than an act of love for the hobby I’ve embraced.”

You, too, may have an inner artist just waiting to be released. Vic discovered his talent in his 60s. Growing up in Indiana, he attended Marian University, graduated, and was drafted into the Army, serving in Vietnam. For over 37 years, he managed various segments of the Sears Credit portfolio. He and his wife Joanna have two children. He also enjoys auto restoration, travel, and woodworking. To join the Sun Lakes Rock Gem and Silver Club and take a class from this amazing artist, visit our website www.slrgs.com.