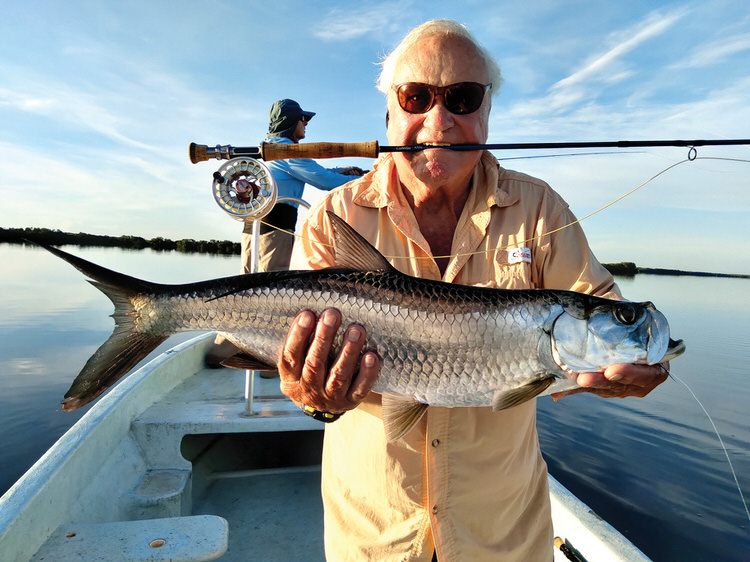 One of the most sought-after fish for saltwater flyrodders is the tarpon, an acrobatic fish that is hard to hook and even harder to land. They are part of the “grand slam” of saltwater flyfishing, along with bonefish and permit. All three are exciting to pursue and will be gently released after a quick photo. Tarpon feed on baitfish and will pursue bait into shallow waters. Some tarpon are resident fish in the mangroves and bays. Others migrate north and south in the Caribbean basin. Tarpon usually grow up in the shallows along the mangroves until they reach a large size. Most challenging are the tarpon from 100 to 200 pounds—real tackle breakers.

Our goal was tarpon in the 20- to 40-pound slot. We had planned and paid for the trip in 2019. It had been delayed three times by COVID-19, and once by tropical storm Nora. Finally, in October, we met in Cancun for the trip north to Río Lagartos, a fishing village on the north of the Yucatan Peninsula. Over the two years, our group had dwindled down to four; one from Sun Lakes, one from Bozeman, one from Maine, and one from Costa Rica. The outfitter had arranged for our shuttle north to the lodge and scheduled the guides. What was interesting was that we were the only Americans there. All the others were from Germany, Austria, or Sweden.

Unlike bonefishing, which can be done walking the beach or flats, tarpon fishing is done from a panga, an open, flat-bottomed boat about 18 feet long. All fishing was done in the mangroves or in the bay, mostly in water less than three feet deep. The guides would motor to an area they felt tarpon would be found, and the guide and the two fishermen would look for rising or rolling fish as the guide poled the boat forward. Casts were usually made in the 70-foot-plus range, placed ahead of the cruising fish. Weather was mild; 80 to 85 degrees. We had a brief shower one afternoon. A three-inch fly tied on a #1 stainless steel hook, in green and white flash, imitating a minnow, seemed to get the most strikes. Tarpon were very strong and difficult to land, usually throwing the hook by jumping. Two large fish broke the hooks at the bend! Wind occasionally can be a challenge, especially if you are fishing in the narrow mangrove channels with trees on both sides of the boat, making casting even more difficult in the tight quarters. It was exciting to see a large fish rush out of the mangroves and take a fly in 12 inches of water!

The schedule the guides used was different than any of us had ever experienced. We met at the dock in the dark at 6 a.m., fished until 11:30 a.m., motored back to the lodge for lunch, and had about three hours off for rest or to explore the harbor area. There are guided tours to the flamingo nesting areas and of the harbor. At 4 p.m. we met back at the guide boats to fish until 7 p.m. Dinner was served at 8 p.m. after a shower and some snacks. Meals were excellent, usually seafood or chicken in a wide variety of dishes.

These remote areas lack a lot of things we take for granted—no stores to buy fishing line or hooks or sports gear. On a previous trip, I observed some kids playing baseball with a ball wrapped in duct tape. I decided my next trip to bring some baseballs and gloves to the local children. With the help of my fellow Sun Lakes Softball members, I collected 14 old baseball gloves, which I re-laced and restored, and 18 baseballs. The guides helped me get the equipment to the local children’s coaches.

If you are looking for a challenging catch-and-release flyfishing adventure, contact Yellow Dog Outfitters. All inclusive, except airfare, is $3,000 to $3,800, depending on the number of days. Certainly a memorable bucket list trip.