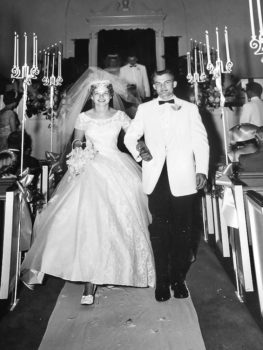 Dwaine and Marlene Hinkle will celebrate their 60th wedding anniversary on June 12, 2020. They met in junior high in Ogallala, Neb. They dated through high school and Dwaine’s four years at Doane College in eastern Nebraska. After graduation, Dwaine went to work for Allstate Insurance in Denver, first as an underwriter and then in sales. He retired in 1996. He enjoyed playing softball for the Sun Lakes ball team for many years after retirement.

The Hinkles lived all of their working careers in the Denver area. Although they still are “snowbirds” to some degree, traveling back to Colorado for the cool summers, they find they are spending more and more time in Arizona.

Marlene was privileged to be able to stay at home while raising their three children: Renee (Garry) Joseph of Surprise, Ariz.; Robin (Dave) Olson of Arvada, Colo.; and Brad (Sharon) Hinkle of Chandler. They have been blessed with eight grandchildren and eight great-grandchildren.

Marlene finally got the opportunity to go to college, courtesy of her employer American States Insurance, in the 90s and graduated in 1995 from Columbia College. Since her first retirement, she has worked part-time for The Charles Insurance Company here in Sun Lakes.

Dwaine and Marlene feel blessed that they were able to travel all over the world in the early years of retirement and are so glad they did it then.

They are members of the Sun Lakes United Church of Christ here in Sun Lakes. Both sing in the choir, and Marlene enjoys playing pinochle several times a week.