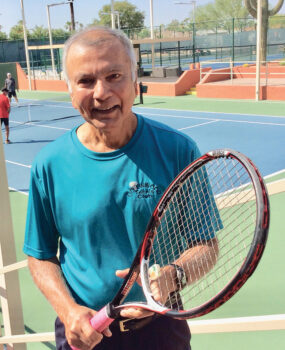 Just when you think plans for the Cottonwood Tennis Club’s (CTC) 2020-21 season are going swimmingly well, COVID-19 demolishes all the hard work.

That’s how the CTC Board felt last month when President Laks Jagnadan and board members Cannon Hill (vice president), Spencer Roberts (treasurer), Ruthanne Strohn (secretary), Jay Ketter (tournament director), and Mary Ann Rice (past president) met and, by unanimous consent, canceled many of the club’s fall activities. Cancellations included the welcome back dinner, the Christmas party, a social with SunBird/Sun Lakes, and the Rainbow Classic. Changes still to be determined are the Triple T Tournament and the Bradshaw/Don Neu Tournament which is not a CTC event.

The free tennis clinics advertised in the August and September issues of The Splash have been suspended until January, 2021, and will be re-evaluated later.

Fortunately, organized play and league play will continue as usual. When courts are not in use for organized or league play, members may sign up to play on the green board next to the courts.

Now, let’s introduce you to the man who led this group of decision makers. Laks Jagnandan was born in Guyana, South America, and lived there for the first 18 years of his life. He left Guyana to pursue higher education in the U.S. He initially went to Mankato, Minn., where he received a BS in mathematics and chemistry. He then moved to Iowa City, Iowa. There he received an MS in math and a DDS from the dental college at U of Iowa. Following that, he moved to Ankeny, Iowa, where he started a dental practice in 1979 and retired in 2011. He became a U.S. citizen in 1982.

He and his wife Sally lived in Ankeny for 39 years before becoming permanent residents in Sun Lakes. Laks and Sally have been married 43 years, have two children, Erin and Alan, and four grandchildren. Daughter Erin lives in Dallas and has two sons. Son Alan lives in Chicago and has two daughters.

“I started playing tennis shortly after moving to Ankeny and played there often,” said Laks. Their Sun Lakes house was purchased in 2012. For the next few years, they lived in Iowa in the summer and Sun Lakes in winter. They became permanent Sun Lakes residents in 2016. He’s been a CTC member since 2013 and served as vice president prior to becoming president.

Laks enjoys playing golf, traveling around the U.S. with Sally and friends, and spending time with family. They have visited many of the national parks and national recreation areas. When asked about his philosophy of life, Laks said, “Act as if you are where you want to be, and you will get to where you want to go!”

The October general membership meeting will be held outside on Court 5. Members are to bring their own chairs, wear a mask, and social distance. For information regarding CTC membership, contact Barb Jorgensen at [email protected]