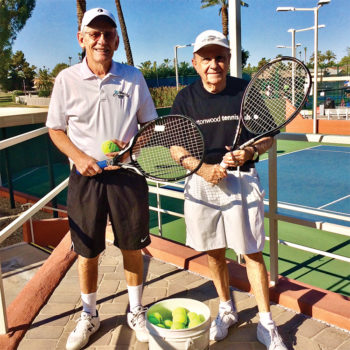 Al Wagner and Pierre Moresi are the chief instructors for Cottonwood’s free tennis clinics which begin in October. Pierre handles the Monday sessions, and Al does the Tuesday classes.

As fall approaches, it’s time to think about the joys of playing tennis and the free tennis clinics offered by Cottonwood Tennis Club (CTC). The classes were started in the early 80s by Don Neu, then Cottonwood’s tennis pro. They’ve gained popularity over the years, and they’re due to begin again in October, a month earlier than in the past.

Al was born in St. Louis, Mo. He has an older brother and sister. He started playing tennis at 12 when his older brother and uncle brought him along to watch them and retrieve balls. They let him hit balls, and he got hooked. “I loved the sound and all the different strategies. I still love the sound of a ball on the sweet spot.”

He graduated high school in St. Louis where he played on the tennis and baseball teams. Southeast Missouri State was his choice of colleges. After graduation, he attended numerous colleges for post grad work.

Al and his wife Kathy met on a blind date. After their second date, “We saw each other eight times in the next seven days.” They have three daughters and five grandchildren, all in the Valley. They discovered Sun Lakes when one of their daughters taught on the Gila River Indian Reservation. “When we were here visiting, we’d drive her to school. Sun Lakes was between where we stayed and the school. We visited the model homes several times and then purchased.”

Prior to retirement, Al taught high school chemistry and coached tennis. At one point, he left teaching and worked in the golf business for four years. He enjoyed working outside. When they first moved to Sun Lakes, Al taught chemistry at Basha High for two years.

“My favorite tennis memory is a singles match I played in high school prior to the creation of the seven-point tiebreaker. I won 8-6, 8-10, 16-14. All my other favorite memories come from coaching.” He coached all three of his daughters and recently spent six years as the coach at Campo Verde High School in Gilbert. During those years, they qualified for state playoffs a few times.

In addition to the lessons, Al served CTC two years as tournament director, one year as vice-president, and two years as president. “Tennis is a great lifetime sport,” said Al. “It enhances one’s social life and allows constant challenges. It’s more complex than most people realize. I’ve been playing 62 years and still find it exciting.”

Besides tennis, he plays the guitar, hikes, does watercolor, babysits grandchildren, makes wine, and goes camping, especially at national parks.

Due to word limit, we’ll introduce you to Pierre Moresi in the next issue. Stay tuned. For information about joining CTC, contact Barb Jorgensen at [email protected]