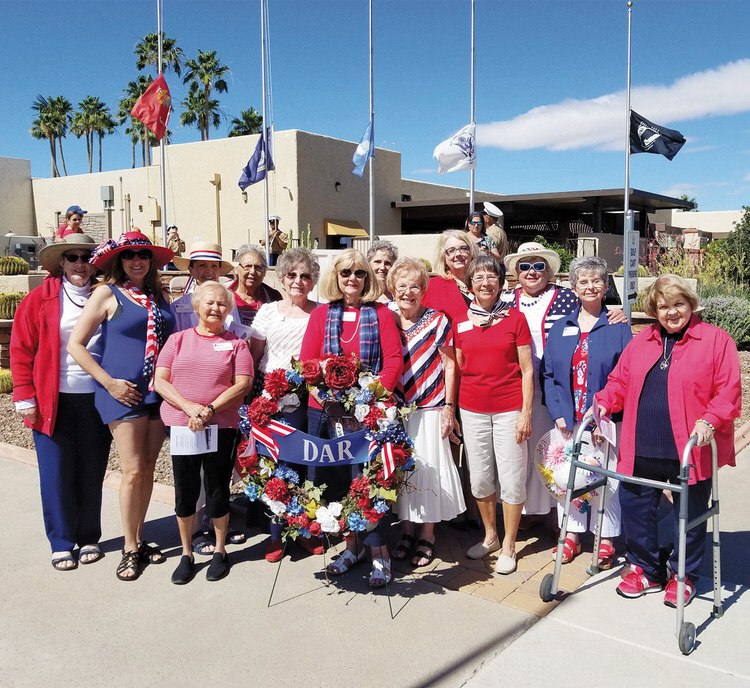 The patriotic women of the Gila Butte Chapter of the DAR

Did you know the marble for the Tomb of the Unknown Soldier came from the Yule quarry in Colorado, approximately an hour from Aspen, where the elevation is close to 8,000 feet? It was quarried by the Vermont Marble Company. The completed tomb is three levels in height.

DAR daughter Alma Krieger, Anasazi Chapter in Glendale, is a member of the family who owns the Yule quarry, and she shared some historical facts about the marble for the tomb: “They quarried it in a single block—47 tons when it came out of the ground. It was taken by flat-car to Vermont.

The four Piccirilli brothers, who also carved the Lincoln Memorial, carved the block. This was very rare, because usually you don’t have even two carvers on the same project due to differing techniques. Carving was completed in 1932.

Alma also mentions that the marble is of a very high grade, has excellent beauty, remarkable for its translucency and clear white tones. It was a fitting choice for the tomb, even though the cost was higher than other marble that was considered.

The month of November is an important one for two significant reasons: First, on the 11th, we celebrate Veterans Day, and second, this November 11 marks the 100th anniversary of the tomb. There will be nationwide ceremonies marking this anniversary at the “eleventh hour of the eleventh day of the eleventh month” going back to what was known as Armistice Day in 1918 that signaled the end of World War I. The day was renamed as Veterans Day to commemorate veterans of all wars in which our country has been involved.

Buried in the Tomb of the Unknown Soldier are four soldiers: The first soldier was exhumed from one of four World War I American cemeteries in France. He was interred in the tomb on Nov. 11, 1921.

In 1956, President Eisenhower signed a bill to select and pay tribute to the unknown soldiers of World War II and Korea. The interment of those individuals took place in 1958.

The fourth soldier, from the Vietnam War, was entombed in 1984. Because of the discovery of DNA and the advent of being able to identify remains, his body was exhumed in 1988 and identified. His family asked that he be buried in St. Louis, his hometown, and he was transported and buried there.

His crypt at the tomb will remain vacant. The crypt cover was replaced with a new inscription that reads, “Honoring and Keeping Faith with America’s Missing Servicemen, 1958-1975.”

The sentinels wear pure wool uniforms 365 days a year 24/7 in their service of guarding the tomb. They are members of the 3rd U.S. Infantry Regiment, known as the “Old Guard,” and are extremely well trained and very committed to their service.

November also means Thanksgiving Day. The dinner served is one of my very favorites. Hope you all enjoy the turkey, stuffing, and pumpkin pie. Don’t forget the whipped cream!