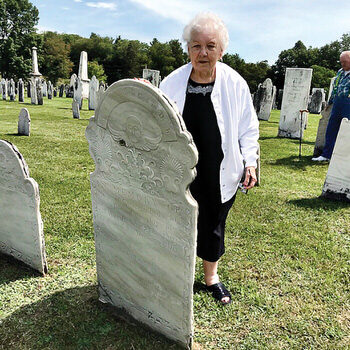 Delphine is standing next to the tombstone of William Stedman, who died in 1815, and whom Delphine has recently proved as a supplemental patriot. When visiting daughter Amanda in Massachusetts, this mother and daughter team loves to visit old family sites and cemeteries as they continue their ancestry research.

This is the story of the Clark family, a family that reaches back to the Great Migration in which Puritan families fled England, seeking religious freedom. It is indeed rare to be able to research and prove one’s line of ancestry back to the Mayflower with detailed and accurate information; however, Delphine and her family have done so.

The Clark family were among the founding families of Stratford, Conn., located on the Long Island Sound in the north of the state. In 1767 they left Connecticut for Shaftsbury, Vt., where they obtained new homesteads through the New Hampshire Grants. The then governor of New Hampshire wanted to keep New York out of Vermont, so he gave Vermont land away grants to settle the country—he may not have had the authority to do this, but it worked!

Eventually, the family moved to Madison County, N.Y., where they spent many years building homesteads and then moved on to what would become the State of Michigan which was truly the edge of the wilderness. The U.S. government was offering land grants, and the land in Michigan was the most arable they had found for farming through all their years of travel. They established the City of Clarkston and, further north, the City of Fenton.

Jeremiah Clark, Jr., is the patriot of our chapter member Delphine Thomas. Jeremiah is her three-times great-grandfather. He fought in the Battle of Bennington, which took place Aug. 16, 1777, as a soldier and survived the war. He died June 1, 1845, and is buried in Clarkston, Oakland County, Mich.

Delphine’s family is in the process of researching Jeremiah’s father, Jeremiah, Sr. The DAR Patriot Index states he was “counselor, assistant, member of the assembly, a judge.” The family agrees that he played a part in the American Revolutionary War, but as an important statesman/activist. Research is ongoing!

And now about October, service month. On the 11th, the day the Daughters of the American Revolution was founded, chapters from coast to coast will participate in their special commitment to their community. Some will hold fundraising events, and some will tackle highway and cemetery cleanup, as well as restoration of tombstones. Some will clean community gardens, while others will sew shawls and lap blankets for our veterans and the elderly. This month our members will provide a variety of comforting services to our veterans, senior facilities, and other worthy organizations who support and aid those in need, including helpless animals. Again, welcome back to the snowbirds! For more information, please contact Pennie Bonnett at [email protected] or call 602-418-8908.