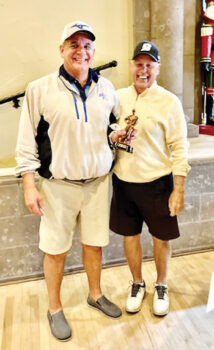 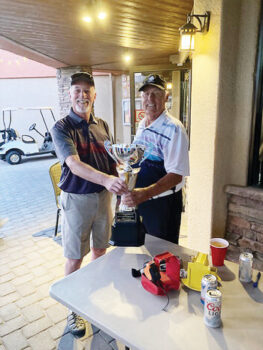 The Cottonwood Men’s Golf Association (CMGA) had a very busy December, not including Christmas and New Year’s Eve. It started with our annual home and home competition with Leisure World Golf Club. Twenty-eight two-man teams from each club played Dec. 2 at Leisure World Golf Course and Dec. 4 at Cottonwood Golf Course. Leisure World provided lunch to all participants prior to an afternoon of good competition. After the first day, Cottonwood led 44-40. An afternoon of good golf was followed by refreshments at Cottonwood. The CMGA group won by a score of 72.5 to 65.5. At the gathering, the trophy, which is retained by the winning team, was returned to CMGA President Gene Kivi until next year’s rematch.

Also played on Dec. 4, was a flighted Low Gross/Low Net event for members not competing in the Leisure World Cup.

Dec. 11 was the monthly 2021 Ace of Aces Qualifier in which the Low Gross and Low Net player from each flight qualifies.

Dec. 18 was a four-man ABCD team event. It was a 2 net scoring format with assigned holes for each player whose net score was used with one other team net score.

Following the Dec. 18 golf event, the annual Welcome Back Luncheon was held in the San Tan Ballroom. This luncheon agenda included a treasurer’s report and the planning of elections for the association’s officers. Also, a trophy was presented to Michael Moore as the Most Improved Player for 2021.

No CMGA event was played on Christmas Day.

Events planned for January include an Ace of Aces Qualifier, a member/member two-day competition, the 2021 Ace of Aces finals, and the President’s Club qualifier.