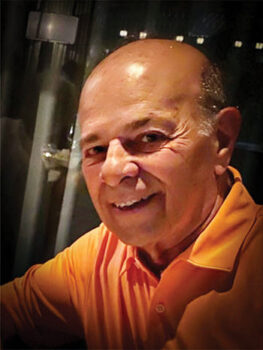 Council 9678 welcomes Brother John Caravella to the Knights of Columbus in Sun Lakes! John moved here in 2019 from the City of Maricopa where he was an active member of Council 38538, having served as financial secretary and trustee. He has continued his service in the Knights as newly-appointed financial secretary for our council and comptroller for the Fourth Degree Assembly.

John first joined the Knights in Bossier City, La., in 2003, where he served on the Leadership Council as family/member director and fourth degree trustee. He said, “I remember being told, ‘Don’t join unless you are going to participate’—I have always kept that philosophy in mind as I worked with the Knights as well as other volunteer organizations!” This has guided his involvement over the years; currently, John volunteers at the Herberger Theater in Phoenix and the Chandler Arts Center.

Originally from Milwaukee, Wisc., John graduated from Messmer High School and Marquette University, where he majored in accounting. He and his wife of 58 years, Sandy, met when he was working at a pizza parlor and she was employed at a movie theater next door. “I guess pizza and popcorn go together … somehow she has put up with me all these years!” he said. The Caravellas have three sons who live in Chandler; Port Washington, Wisc.; and Midlothian, Texas; and five grandchildren, who they love to spoil!

Brother Caravella has a distinguished career in industry, including seven years in cost accounting and supervision with the electric motor industry and 10 years in management with a large, paper-machinery manufacturer. In these jobs, he managed production plants in Kimberly and Appleton, Wisc., and Griffin, Ga. Throughout his career, he also managed manufacturing plants for factory-built homes that were located in numerous states, ranging from Vermont to California. Under his direction, park models, modular, and HUD homes were produced. After retiring (which he doesn’t appear to be very good at) and “just to keep busy,” he became a tax professional at H & R Block, managing three offices in Maricopa and Casa Grande for 12 years. When asked how many moves he has made in his career, John said, “We are living in our 20th and, hopefully, last home!”

When not pursuing multiple jobs, John is an avid golf enthusiast. “I’m not very good at golf, but I love to meet friends on the many golf courses in the area. We enjoy the year-round warm weather and the chance to get some healthy exercise!” he said.

When asked his overall evaluation of the Order, John said, “For me, it has been an outstanding organization! I encourage all Catholic men to join the Knights of Columbus … if they are willing to participate! As the Marines say, ‘We need a few (more) good men!’”

For information on membership opportunities on the Knights, please contact Grand Knight Ken Ford at 480-216-6808 or [email protected]