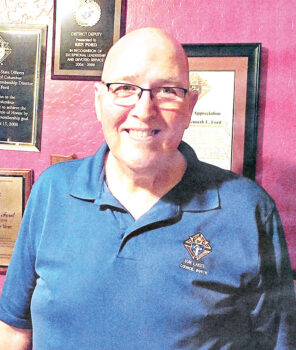 Kenneth E. Ford is immediate past Grand Knight and the current chairman of the Council’s Fall Charity Raffle, the sole fundraiser allowed by the pandemic. Although physically challenged from a serious auto accident, Ken has organized an impressive campaign to secure funds for the Council’s charitable and service activities. “We had to have a fundraiser that did not require a lot of people getting together, and thus decided on a limited raffle, conducted by email and U.S. mail and open to the public, with only 800 tickets at $5 each, three cash prizes of $500, $300, and $200. The drawings will be held on Dec. 13, just in time for Christmas! It is not necessary to be present to win,” he explained. (Note: information on how to purchase the raffle tickets can be found at the end of this article.)

A native Arizonan, Ken graduated from South Mountain High School, where he was honored for his work in the Boys Club. He earned a B.A. in theology from Lubbock (Texas) Christian College. His work as an ordained minister was interrupted by an injury that resulted in amputation of his right foot! Undaunted, he moved to Minnesota to attend the Northwestern College of Chiropractic, converted to Catholicism and joined the Knights of Columbus. He moved through the officer positions to become Grand Knight, and eventually served as District Deputy. While living in Minnesota, he received numerous awards, including: Knight of the Year, Grand Knight of the Year, District Deputy of the Year, and All-Star District Deputy! It is noteworthy that he initiated “Sharing and Caring Hands” (to feed the homeless) and “Coats for Kids” programs in his Council. Furthermore, during his four-year term as District Deputy, he organized a statewide first-in-the-U.S. Soccer Challenge! Later, as State Membership Director, he helped Minnesota achieve the Circle of Honor for reaching recruitment goals. During his terms as Grand Knight (GK) in Minnesota, his Council won three state awards; as GK in two councils in Arizona, five state awards were won! He also received two letters of commendation from Supreme Knight Carl Anderson for his care of others. In one case, while on his way to church, he stopped to give life-saving CPR to a neighbor!

Ken currently lives in Chandler with his wife Julie and his mother Wanda. Ken attributes any success he has had in life to prayer and the loving support of family, friends, and brother Knights. “I joined the Knights to learn more about the Catholic faith and to better serve the community,” he said, adding, “My main interests involve volunteer work!” By all measures, Ken Ford has overcome serious physical challenges to attain notable achievements!

To purchase Fall Charity Raffle tickets, send your printed contact information and a check for $5 per ticket, made out to Council 9678, and addressed to Ken Ford at 6024 S. Opal Court, Chandler, AZ 85249. Questions? Contact Ken at [email protected]