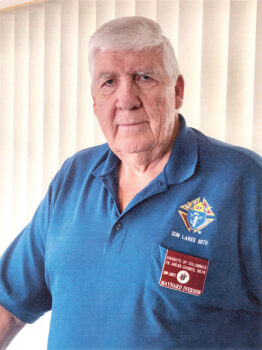 A native of North Dakota, Maynard Iverson currently serves as recorder/scribe (secretary) for the Knights of Columbus Council and Assembly. He taught high school Vo-Ag for eight years before spending 35 years in the Southeast as a teacher educator. He retired as emeritus professor of agricultural/vo-tech teacher education at the University of Georgia. He became a Knight shortly after moving to Sun Lakes in 2005. “I joined the Knights at St. Steven’s largely because of their family breakfasts, which were like the father/son breakfasts we put on for our small parish in Dakota! I also liked the dedication of the Knights to the four pillars of Charity, Unity, Fraternity, and Patriotism—upon which the four levels of membership are based. I joined the Fourth Degree in order to take part in the Honor Guard and other service activities of the Assembly.”

The Fourth Degree is known as the Patriotic Arm of the Order. Initiated into the Fourth Degree Assembly in 2010, he joined the Honor Guard and was involved in numerous ceremonies at the church. He was elected Faithful Navigator of the Assembly in 2012 and led the organization to partner with the Marine Corps Reserve in hosting the Ice Cream Treats for VA Patients program. He also got the Knights involved in the AZ StandDown for Homeless Veterans, an annual event that provides numerous services to nearly 2,000 needy veterans. Each October, the St. Steven’s Assembly provides volunteers for the AZ State Fair to help pay for the rental of the Coliseum for StandDown. In 2019, St. Steven’s Knights earned over $1,000 toward the facility rental.

Maynard and his wife of 56 years, Mitzi, live in Cottonwood. She is an avid reader, card maker, bridge player, and active member of the DAR. They have two children who live in Glendale and Colorado. “Retirement in Arizona is great, and involvement in the Knights and other Sun Lakes organizations enriches my life!” he tells all visitors, some of whom include vocational-technical teachers whom he helped prepare during his 43-year career!