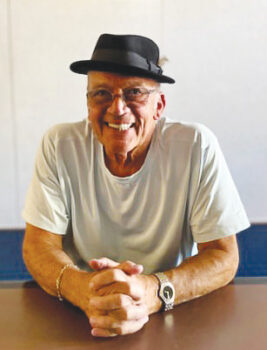 Rich Paladino and his hat

This month I sat down with Rich Paladino. If you saw the previous SLCT play Catch Me If You Can, you’ll recognize him as Detective Levine. This man has done so much in his life that it was difficult to capture it all. I needed to do a two-hour movie instead of a one-hour interview.

Rich was born in New York on Staten Island and raised in Italian Harlem. He had a variety of jobs. As a kid, he sold newspapers that took him into the Mob clubs. He also worked in construction. But it was his job in NYC at the Stock Market and being around a different variety of people that led him to become interested in Broadway shows. This love of the theater intrigued him to attend The Neighborhood Playhouse (a prestigious, two-year actors’ training school that still exists today) in 1964 and 1965. He did Summer Stock at the Red Barn Theater in New England during the summer break. He performed in musicals and loved it. At The Neighborhood Playhouse, he studied under the famous Sandy Meisner who created the Meisner Technique. As a side note: Michael Douglas is now in a Netflix Series called The Kominsky Method, which many people feel is about Sandy Meisner. Douglas’ character is Sandy Kominsky.

In 1968 Rich moved to Los Angeles in pursuit of a possible career in acting, only to meet his first wife, a mother of two. Married life and parenting became his career. He had an assortment of jobs there as well, mostly in restaurant industry labor. He finally landed a job in the music industry as a record promoter for ABC/Dunhill, RCA, and Elektra Records. He worked with many popular artists of the time. Through all this time, he remained a big fan of the theater. After his first marriage of six years ended in 1974, he remarried five years later. Rich and his current wife have been together for 38 years. In 1991 they moved from California to Arizona with their two young children. Sun Lakes became their new home in 2019 after retiring from auto sales.

I mentioned that he played a great Detective Levine in Catch Me If You Can. Did I forget to mention that the director offered him the role because of his hat? Well, before that, he joined the SLCT’s improv group, The ImproVables, and he was in the chorus of SLCT’s You’re a Good Man, Charlie Brown. Even though Rich hadn’t done any real acting in over 55 years, by taking the part in Catch Me If You Can, he thought it was a chance to show his family and friends if he had it in him. So, without any idea what he was getting into, he committed himself by inviting them all to come to see him perform before he even started rehearsals. He estimates that between family, friends, and coworkers, there may have been at least 70 of them during the course of the play. Rich commented that the family reunion and the whole experience exceeded his expectations. He enjoyed working with the cast members. I asked if he would consider doing another play. He said, at this time he’s unsure. He’s thinking of a “One and Done” possibility, but then he remembers a favorite word of his, “vulnerability.” I guess we’ll find out, since Time Will Tell.