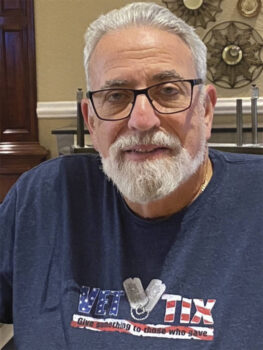 Recently, I sat down with Sun Lakes Community Theatre (SLCT) Board of Directors President Gregory Posniack. It was an enjoyable chat.

Greg came here from Brooklyn, N.Y., in March of 2017, just four to five months after retiring from an insurance career of 54 years as a property casualty underwriter. He and his wife Diane, married 57 years, have three sons. Glenn and Ben live nearby, and Lee lives in New York. He is a proud grandfather to six boys and two girls. Before making the permanent move here, he had visited many times. His middle son, Ben, has lived here over 25 years. Greg would always come out for a week or so to visit multiple times during the year. He remembers the first summer he was here, and the temps were over 110 degrees for more than three weeks. It was eye-opening but survivable.

It wasn’t too long after finally getting settled in Sun Lakes that he became aware of the Sun Lakes Community Theatre. His middle son’s mother-in-law was very active in this group. She was currently directing a play, Beau Jest. Greg was made aware of this group and became involved. He started out singing in the chorus. He was the dialect coach for Jewish prayers. He also sang a song that was in the commercials during that play. He realized he had found his love of doing plays. He never doubted it, since he knew he was a “ham.” He has since been in eight SLCT productions.

He has stayed active through his life. In Brooklyn, he was an active member in the Boy Scouts. As a dad of three boys, how could he not? He finished up as troop treasurer. He was also president of the Madison Jewish Center.

In Sun Lakes/Oakwood, he is on the board of the Democratic Club. He sings in the choir of the Sun Lakes Jewish Congregation. He drives for Neighbors Who Care. He is on the Building and Grounds Committee, co-chair of the Insurance Sub-Committee and liaison to the Master Planning Committee. He is also active in the Knights of Pythias, and he is the Grand Outer Guard of the Grand Lodge of the State of Arizona.

He feels honored to be active in SLCT. He is not only the current president, but also the assistant treasurer. His favorite role was in 12 Angry Jurors, as Juror #9. He says that play stood out to him, since it was all drama. In The Last Round-Up of the Guacamole Queens, he played a lovable goofball. In Plaza Suite, he played a waiter delivering room service. He remembered how he tried out for You’re a Good Man, Charlie Brown, but as playing a six-year-old boy, he couldn’t take on that role, since he wouldn’t shave his mustache and beard. They all have special memories for him. In addition to acting, he takes on other jobs as needed to help out when necessary. When you arrive to see a performance, you may just see Greg in the lobby working as an usher taking tickets and helping people find their seats, or even giving out cookies. This man is passionate about helping others, and SLCT is very fortunate to have him as a member.