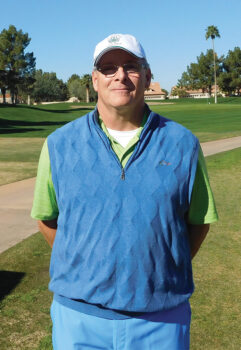 If you see a young man at an IronOaks golf course with matching knee braces, practicing his chipping, chances are, you’ve just met Bruce Wright.

Bruce was born in 1958 in Indianapolis. His father was an insurance agent and moved the family to Terre Haute when Bruce was six months old. His mother was a homemaker but did lots of charity work, including 10,000 hours with Union Hospital.

Bruce enjoyed his Scouting. His father was inspirational in Bruce achieving his Eagle Scout. He enjoyed working on merit badges, teamwork, and summer camps.

His first knee injury was in 1973, playing basketball and football. The injuries changed his focus to swimming at Terre Haute North High School while in junior high. In high school, he graduated with three school records—his Butterfly record holding for 10 years.

Bruce earned a degree in mechanical engineering technology at Indiana State University. Bruce then worked for BF Goodrich in Akron, designing helicopter water flotation devices and ships’ life rafts. He was awarded a patent for an inflatable hot tub. His golf career took roots there, playing the beautiful Akron courses.

In 1984 Bruce relocated to Mesa, working for Hughes Helicopters, which became Boeing, as a mechanical engineer supporting Production Flight Testing of aircraft deliveries to the U.S. Army. At times, he still questions the wisdom of moving to Arizona in August, but happy he endured the heat and stayed. He worked various helicopter programs in Mesa until his retirement in 2015.

At Boeing he was active in their Employee Community Charity Fund and a local charity, Feeding Matters, for seven years, two as chairman. Their focus is overcoming Pediatric Eating Disorders.

He met Lynne at Boeing, and they’ve been married for 30 years. They moved to Chandler to be close to Bruce’s parents in Oakwood and built their house adjacent to Sun Lakes in 2001. Although not a golfer, Lynne supports Bruce’s golf passion, as it provides him hours of fun and making friends.

Prior to retirement, Bruce maybe played golf twice a year. Once his clubs were stolen from the garage, he felt it eliminated the torture of playing. Now motivated by his stepson Matt, he learned to play in earnest. Matt, an incredible golfer, recently shot a 59 at Ironwood. Playing almost weekly, Bruce feels fortunate to play with him, but admits it’s challenging.

Bruce took lessons in 2015 and now loves the game. He’s on his fourth generation of swing development, most recently under Kevin Marugame’s teachings. Bruce says if he could just learn to chip, he’d be dangerous.

Bruce enjoys working with Dan Smith, Ironwood Tournament Manager, creating weekly pairings in Golf Genesis. He feels it an honor to be part of the IMGA weekly game planning, which allows members to enjoy various events, delighted that Kevin Marugame leads this activity and supports Dan and himself.

Bruce, we thank you for all of your efforts in supporting IMGA!