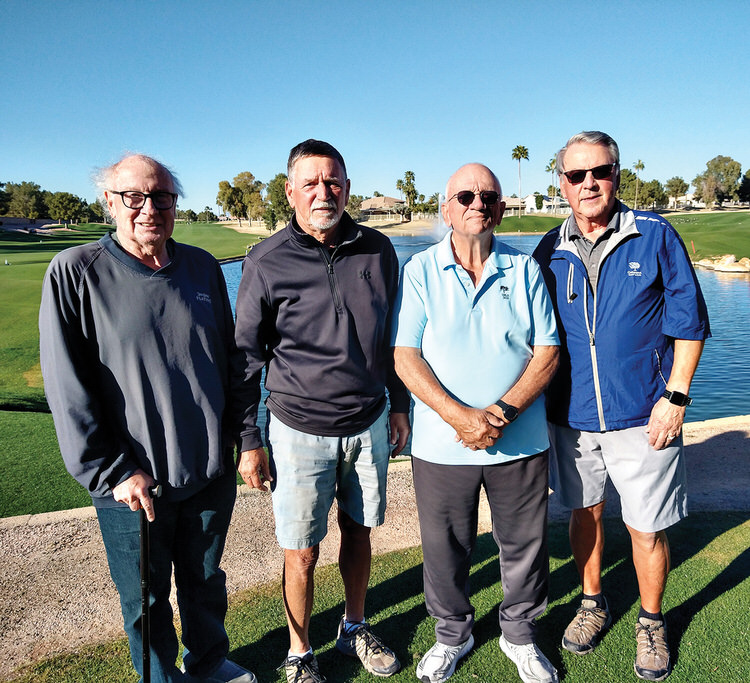 IMGA is recognizing the Prize Committee for their efforts in timely completion of the chit tallies. Next to a good score, knowing where you placed and chits awarded is important. Two years ago, Rich Rathburn joined the IMGA Board as prize committee chairman. Awarding chits was a manual process, using a member list to look up chit numbers, then typing the name, chit number, and chits won. He realized a computer program was needed and created one.

Rich handled the prizes himself for a few months, then sought help from other members. Dick Boscombe was the first to join, helping to smooth out the program. Shortly thereafter, John and Larry joined. Now their mission is to complete chit payouts the same day as play.

Here is a brief background of each member:

Rich Rathburn: Rich was born and raised in Battle Creek, Mich. As a teenager, he worked for Junior Walker, doing clerical work, being paid in records. Junior set him up as the opening act drummer touring with Deep Purple’s American Tour. Then he began a 20-year career as a control room operator for every type of power plant, later launching his own printing business, which he operated for 30 years.

Besides playing lots of golf, Rich collects original art. He and his wife Sandy display 130 originals on their walls—many from world-renowned artists. Rich has accumulated 11 holes-in-one.

Dick Boscombe: Dick was born and raised in Swansea, Mass. He graduated from Northeastern University with a B.S. in industrial engineering. There he met his wife Mary Jane. They’ve been married 52 years with three sons and four grandchildren.

Dick’s career started at Commonwealth Gas as a member of a team that designed and installed a System Control/Data Acquisition (SCADA) computer system. In 1978 he was recruited by San Diego Gas and Electric (SDG&E) to lead their SCADA project. While there, Dick went to law school, passing the California bar in 1996 and interning at the San Diego Attorney’s Office. In 1998 they moved to Seattle where Dick became the information technology manager for a hotel/athletic club.

Dick retired in 2009, then moved to Sun Lakes. Here he continued a hobby started in Seattle—road bicycling. By 2012, he was doing long-distance rides, posting 14,000 miles, including a seven-day ride along the Oregon coast. He slowly transitioned to playing golf, going from one day per week to now six or seven. Unfortunately, Dick has never had a hole-in-one. Where’s the fairness, Rich?

Larry Gagnon: Larry was born and raised on a small farm near Waterville, Maine. He states what his parents lacked in wealth, they made up in character. He left with a strong work ethic and the principle to do the right thing.

Graduating from UMaine with an engineering degree, Larry worked briefly as an engineer before entering USAF Pilot Training. Terrified of heights, the program was extremely stressful, but it taught him a great life lesson—never let fear control you. Larry went on to fly airlift missions in Vietnam and air refueling tankers in the USA.

His Air Force life led him to a challenging yet satisfying seven years as a facility project manager for the West Coast Space Shuttle program. The program, within weeks of launch when the Challenger disaster occurred, was canceled. He was transferred to Denver and worked various assignments before retiring as plant operations manager for an aerospace contractor.

Larry enjoyed skiing in the fantastic snows of the Rocky Mountains, having no desire to return to the icy New England slopes. Finally retiring, two changes occurred in his life—the introduction to golf and relocation to Arizona. His wife Barbara is a native of Chandler. He loves Sun Lakes and claims he’s still trying to figure out how to play golf!

Larry is obviously a very humble person, as he won the Ironwood Cup Championship in 2020.

John Sinks: John was born in Waukegan, Ill., and raised in Zion, Ill. He spent his career as a pharmacist until retirement. Now he loves to travel to various cities for sporting events.

Living in Tempe, he’s not involved in Sun Lakes except for golfing. John has had two holes-in-one. He despises Palms hole number 7, as he once had a 14 without ever hitting into the water. He really enjoys golfing at Sun Lakes where he has a great group—thanking Gene Meyer for recruiting him.