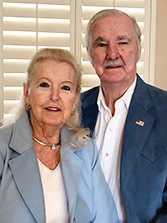 Joseph and Mary Mullen of Windflower Court in Sun Lakes celebrated their 60th wedding anniversary on Dec. 30. The couple met in grade school in Terre Haute, Ind., where both were born and educated. Mary graduated from Indiana State, and Joe served four years in the U.S. Air Force. After their wedding in 1961, the couple settled in Middletown, Ohio, where Mary taught high school math for 20 years and Joe was vice president and CFO of an independent insurance claims and investigations company. They have a daughter, Shawna Lawry of Sun Lakes, and a son, Joel, who makes his home in Carlsbad, Calif., with his wife Chanda.

Joe and Mary moved to Sun Lakes 10 years ago, after retiring to Scottsdale from Ohio in 1989. They are lifelong dance partners. Their first real date was attending the prom in high school in Terre Haute in 1952. The couple celebrated their special anniversary with a small family gathering, followed by an evening of dancing with friends at Palo Verde Country Club.