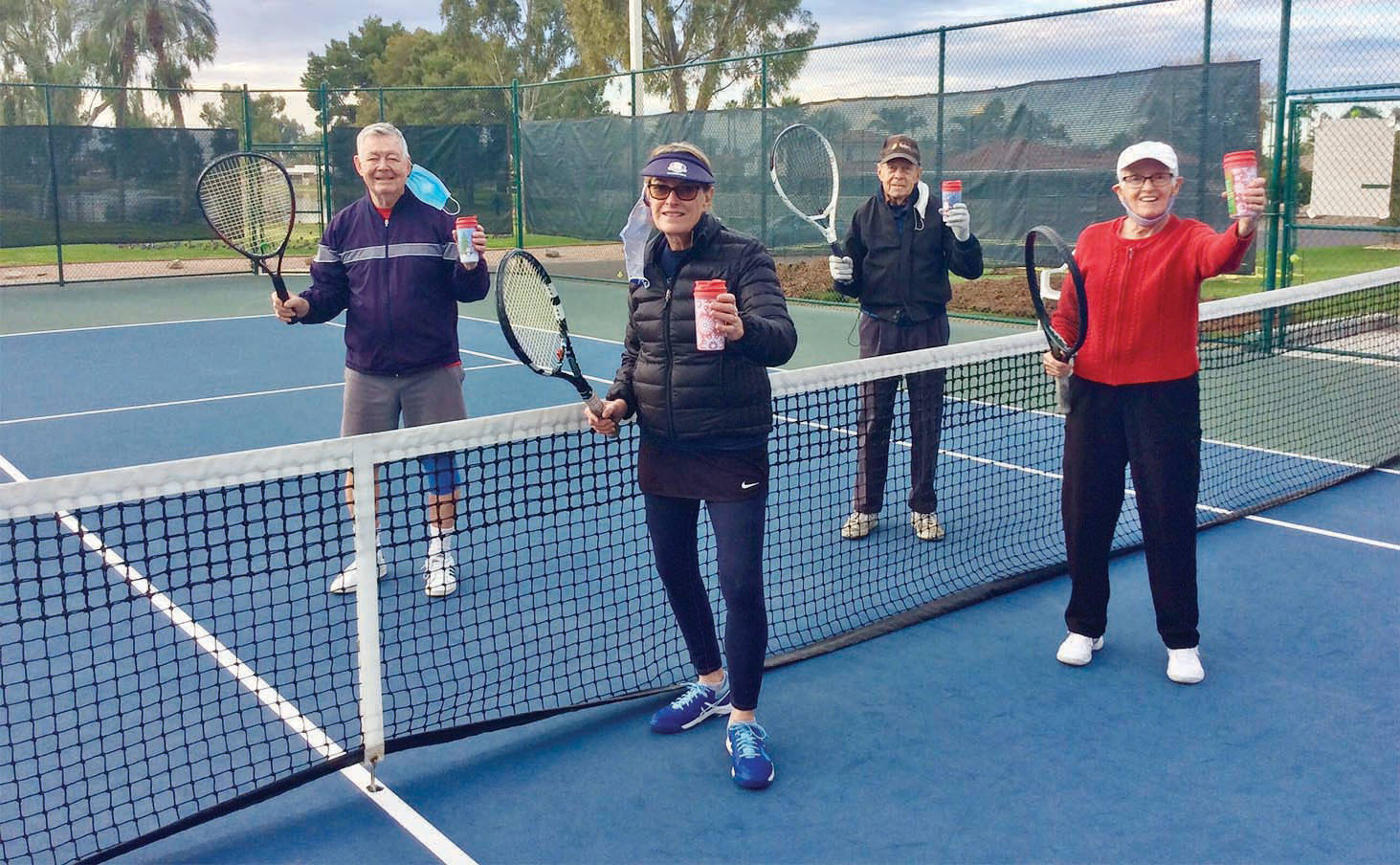 On Christmas Day, four members of CTC decided to give a cheer for the season (left to right): Rod Johnson, Ruthanne Strohn, Jerry Picket, and Penny Petersen.

Mixed Doubles is great fun. Cottonwood Tennis Club reserves every Friday morning for mixed play. Dick Kane, coordinator, oversees the organized play for Fridays. Those who enjoy mixed doubles are addicted to it. “The mixed format gives you an opportunity to play with different people,” said Ruthanne Strohn. “You get to know some of the men, and it’s a very cordial, yet challenging experience.”

This year, both Christmas Day and New Year’s Day fell on a Friday. The people who played on those two days were die-hard fans of mixed. Also, due to COVID, many people were unable to travel and were stuck in Sun Lakes on a holiday with nothing to do. So, tennis solved their problem.

On Christmas morning of 2020, four brave souls decided to offer a holiday cheer. That group included Rod Johnson, Ruthanne Strohn, Jerry Picker, and Penny Petersen. They offered their toast. Then they played for the time they were allowed. After the morning of doubles tennis, they all adjourned to spend Christmas at home.

Here’s the way Friday mixed works: Players who wish to play sign up on the bulletin board. The scheduler for that month picks up the sign-up sheet on Tuesday night. That person then decides who will play together and on what court. The assignments must be posted 48 hours prior to play time. The scheduler tries to match partners who are at approximately the same playing level. The first set is played with a man and woman on each side. After that set, the partners switch and play another set. If time permits, the third set can be guys against gals or back to the first set partnership. If there is a tie in a game, the point is played gender to gender. Schedulers change monthly, but Dick Kane supervises the entire year.

Normally, CTC holds a Mixed Doubles Tournament in January. This year, due to the COVID pandemic, that tournament was canceled. Virtually all the tournaments have been canceled for this year. So, all of us have to do something to keep busy, and signing up for mixed doubles on Friday is a good expenditure of a player’s time.