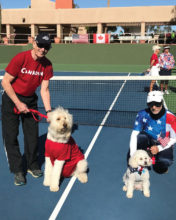 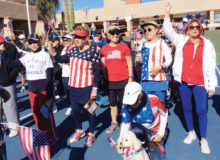 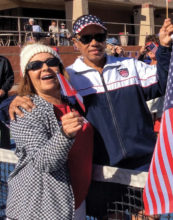 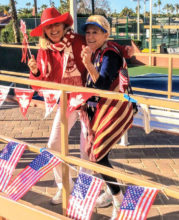 Everyone loves to dress up! But, to dress up and also play tennis and eat food favorites from each country? That’s a real winner. It’s a one-day event characterized by friendly competition between Canadian CTC members and members from across the USA. There were women’s doubles, men’s doubles and mixed doubles. The fun began early in the morning and continued through mid-afternoon with a pause for lunch and a huge parade in which competing countries were led by mascots (dogs dressed up too) down the sidewalk and around Center Court.

At the end of the parade, everyone sang the two national anthems before going back to the courts for more competition. In the end, the Canadian Team was victorious. The Canada vs. USA tournament is now going to be an annual feature. Many people who don’t even play tennis attended to support their teams.