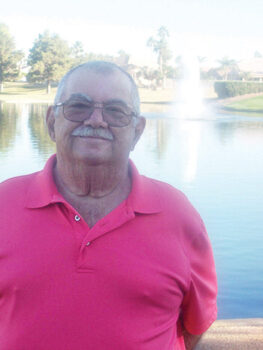 Russell (Eddie) Cauffman was born in April of 1945 at Fort Meade, Md., to Russell and Marjorie Cauffman, while his father was serving in the military. At three months, he and his mother traveled by train to be with his father, stationed in Oregon. After his father’s discharge, they moved back to Rochester, Ind., where his parents had married.

Eddie was the oldest of six children, with three brothers and two sisters. The family moved to Hudson Lake, Ind., in 1951, where his mother was a beautician and his father worked in a factory. He received his education in nearby New Carlisle, playing baseball, football, and basketball throughout high school. He loved playing sports but always had the distinction of being the shortest. As Eddie stated, “I may have been the shortest, but I played.” In football, his stout physique earned him the nickname “Tank.”

Eddie spent part of his summers at his grandfather’s farm milking cows and slopping hogs. Here he had an accident, running a pitchfork through his foot. His grandfather, undoubtedly helping Eddie with his personal growth, told him whatever they do to you, take it like a man.

Eddie had a paper route that stretched over six miles. He would ride his bike in good weather and walk when it rained or snowed. After high school, he worked in a grocery store, learning to be a meat cutter. Not liking this career, he found work at a local wire manufacturer.

Now 24, Eddie began playing golf with a friend on a nine-hole course near his home. The second time he played, he was hooked. He found the game a personal challenge, but also liked the camaraderie. One highlight of his golf career was a hole-in-one at Ironwood in April, 2016.

In 1979 Eddie visited his brother’s family in Mesa. He was met at the airport by his sister-in-law who had brought along a girlfriend, Diane. Before long, he and Diane were dating, and after a short courtship, they decided to get married. He then moved Diane and her two young children, Anjee and Tad, back to South Bend. Now the family has grown to include their spouses Dale and Beverly; five grandchildren: Rebecca, Danielle, Ryan, Arick, and Joey; and one great-grandchild, Ethan.

Eddie joined Miles Distributing, a wholesaler of ceramic tiles. He started in the warehouse and, with time, became the first full-time outside salesman. He remained at Miles for 34 years, then retired and moved to Arizona in 2011.

Eddie stated he tries to treat others the way he would like to be treated. He cites as an example a meeting with Ara Parseghian, famed Notre Dame football coach, at South Bend Country Club. A year later, he met Ara again and was impressed that Ara had remembered his name.

Eddie has been a course ranger at Ironwood for nine years.

Thank you, Eddie, for your support!