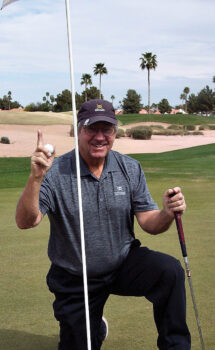 Bruce McCorkle, IMGA May Golfer of the Month, on the 17th hole at Ironwood, where he scored his first hole-in-one this March.

Bruce’s lucky number might be 17. Bruce scored his first hole-in-one on the 17th hole at Ironwood this March. In 2017, he won the Ironwood Cup. That year, Ironwood Men’s Golf Association (IMGA) also won, as Bruce became the publicity chairman. He is now ready to step back at IMGA. He will continue to be active with the website member album updates and overseeing the plaque and trophy requirements.

Bruce has the distinction of being the first IMGA member to be featured twice as Golfer of the Month, the first being March of 2017. Here is a synopsis of that article:

Bruce grew up in Breckenridge, Texas, and attended high school there, working part time in a small grocery store. After high school and one year of college, Bruce decided to follow the family tradition and joined the military, volunteering for the 101st Airborne Division in Vietnam and surviving, amongst other actions, the Battle of Firebase Ripcord, which saw 200 U.S. soldiers killed, including his battalion commander.

After military service, Bruce attended Oklahoma State University and three universities in Mexico, receiving a degree in marketing and Spanish. At his first job after graduation, while attending a training program in Lancaster, Pa., he met his wife Carolyn who was also training. The small-town Texas boy married a California debutante, and they have now been married 44 years, raising two children, Mathew and Michelle.

Following Carolyn’s fast-track career, they lived in Lancaster, Portland, Chicago, and Cleveland. Carolyn was a trailblazer, the first female regional manager in the 100-year history of Armstrong Flooring Company.

After nine years of marriage and the arrival of their first child, Carolyn became tired of handing him over to their live-in nanny. She retired from corporate America and became a full-time mom … homeschooling Matthew and Michelle through high school, while both Bruce and Carolyn ran speech and debate tournaments in several states.

As a single-income family, Bruce got serious about his career and, by the grace of God, spent 30 years in the publishing business, retiring from a division of Hearst Publishing with marketing responsibility for half of the U.S., Canada, and Puerto Rico.

His efforts are highly regarded at IMGA. One of the board presidents offered, “I asked Bruce to create a monthly article highlighting members … he provided excellent coverage, extending it into the Splash and freely giving up personal time to support club activities.” Another president, “He did so in exemplary fashion—always there, taking photos, writing Splash articles … always promoting IMGA.”

Bruce enjoys his golf, playing regularly at Ironwood and Oakwood. But another interest is music—playing rhythm guitar and singing in a band named Recycle. He apparently is also a songwriter. After much effort upgrading the irrigation system at his house, he decided to write a song entitled, “The Arizona Drip Line Blues.” The song is now in the band’s playlist.

When you see Bruce, please say thanks for his efforts at IMGA.