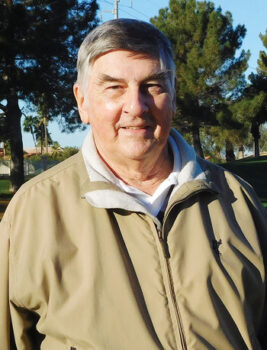 Jim Martin, IMGA Golfer of the Month for February 2022

Jim was born in Sturgeon Bay, Wisc. His father was the superintendent of a shipyard that built LSTs, tankers, and other small ships during World War II. His mother stayed at home, busy raising nine children. As the family grew up, she became a successful Avon lady.

Jim’s family lived just across the street from the bay. He spent his grade school days fishing the bay in his “leaky old rowboat.” In high school he had a hand-me-down, 21-foot sailboat, which he was able to keep on the bay near the house, allowing him unlimited use. He also kept himself busy with a paper route and then as a gas station attendant. In the summer he found work at a shipyard that built minesweepers and PT boats.

After high school, he spent two years at the Spencerian Business College in Milwaukee, living for free with an aunt and uncle and working in a sporting goods store. In 1957, as school funds began to dry up, he moved to Glendale, Calif., with an older brother. Within two weeks of his relocation, he had his first full-time job (with IBM), an apartment, and a car.

In 1965 Jim was relocated to a facility in Santa Barbara, Calif. He remained there until he retired in 1992. Starting in the parts department, he progressed through the administrative ranks with many interesting positions until being made a staff assistant. During his time with IBM, he was awarded two Means Service Awards, which included trips to Miami and Toronto and first class stays while there.

In California, he had enlisted in the Army reserves, spending six months at Fort Ord for training. As a reservist, he was once called to active duty with the 338th Data Processing unit for a 10-month period.

Jim met his wife Pat in Santa Barbara shortly after he moved there. They have a son, daughter, and two grandchildren. The grandchildren are both attending college in California—one at Cal Poly, San Luis Obispo, and the other at U.C. San Diego. Jim and Pat moved here in 1996 after Jim’s retirement. They enjoy going to brunches several times a week, with Chase Diner being Jim’s favorite. Both enjoy cruises, having memorable trips to Alaska, South America, Panama Canal, and Hawaii.

Jim spends his time playing cards, reading, doing crossword puzzles, and, of course, golfing. Soon after joining IMGA many years ago, he volunteered for the Scoring Committee, doing hand verification of player scores. He did this for 15 years until recently when IMGA went to an automated system. His golfing career has been highlighted with two holes-in-one while on golfing trips to Hawaii and Canada.

Jim, thank you for your many years of service to IMGA!