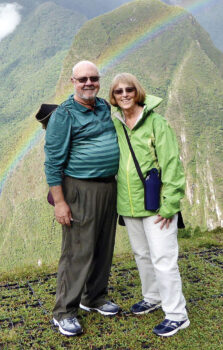 Wayne Karp, March IMGA Golfer of the Month, with his wife Janet at Machu Picchu

Wayne loves his golf, playing several times a week. He and his wife Janet love to travel, having visited every continent except Africa which, hopefully, will be visited this year.

Wayne was born in Aurora, Ill., March 15, 1950, the oldest of four siblings. He was raised in Montgomery until high school when his family returned to Aurora. He found that whatever he became involved in, he would be a self-starter and look for opportunities to succeed. His life’s career was launched, in part, by working at a small, neighborhood pharmacy during high school and college. Wayne recalls that his boss taught him to drive a stick shift car—his father unable to teach him, as he worked two jobs.

Wayne headed to college at Western Illinois University where he began preparing for his career but, more importantly, met his wife of 48 years, Janet, together raising three children. Not surprisingly, he graduated from the University of Illinois Medical Center with a degree in pharmacy. He then worked for two years in their teaching hospital before returning to Aurora, becoming a pharmacist at the pharmacy where he worked in high school. Wayne and two partners bought the owner’s interest and ran the pharmacy for seven years.

Now a bona-fide, professional self-starter, Wayne and four other pharmacists started a buying group made up of independent pharmacies, and within two years, it consisted of 600 pharmacies in four states. This group ultimately became known as PBMs (short for Pharmacy Benefit Managers). During this time, Wayne also served as director-at-large for the Illinois Pharmacists Association. As a result of his efforts, he was awarded Pharmacist of the Year. He also served as treasurer for the Aurora Area Pharmacist Association.

Fascinated by computers, Wayne went back to school, seeking a degree in computer science. He found himself using these skills to become a director of project management for a pharmacy computer company. Eventually, he decided to move into independent consulting which allowed him to fully retire at age 60.

As for hobbies and interests in retirement, he is a self-proclaimed computer nerd, a skill which he lends to IMGA as internet chair and helping with two other websites. He has also served on various HOA committees and on the HOA board for three years. Golfing has been a large part of Wayne’s life at Sun Lakes, but slowed down recently by heart surgery. A golfing highlight was a hole-in-one on No. 17 at Ironwood in 2013.

He and Janet are big travelers, averaging three cruises and/or extended European tours per year. The capper was a 75-day cruise in 2020 to places like Antarctica, and navigating the Amazon River. Unfortunately, the cruise had to end two days short with the COVID-19 outbreak. But very much the optimists, they have four cruises booked in 2021.

Wayne, thanks for all of your efforts at Sun Lakes and for IMGA!