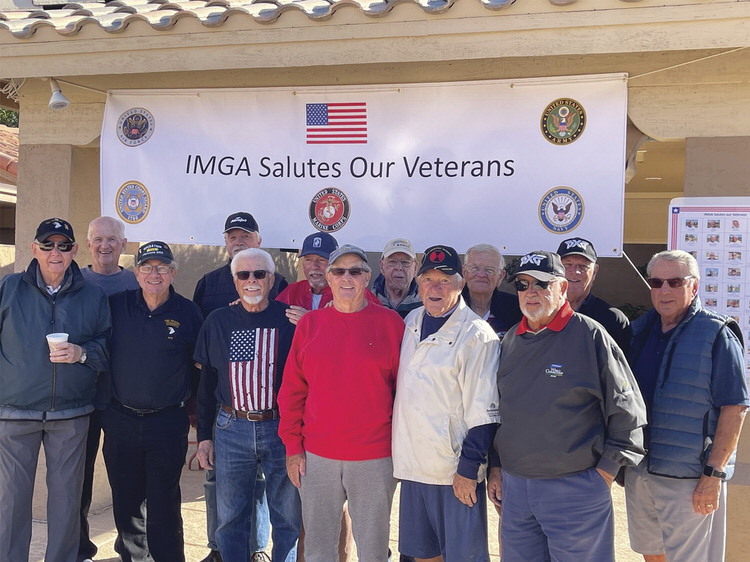 IMGA Veteran Recognition: On Nov. 11 the IMGA Board sponsored a Veterans Recognition held at the Halley pool ramada. The event was hosted by Bob Clark, IMGA president.

After remarks by Bob Clark and Michele Renehan, director of communications at IronOaks, veterans offered comments about their military service. It was the highlight of the event as the IMGA vets provided personal insight into their duties. The comments included a concern about passing flight school, spying on Russian communications, deadly battles in the jungles of Vietnam, Naval experiences, and serving as medical professionals—a pharmacist and a dentist. Thanks again to our many veterans for their service

Ryder Cup: The Ryder Cup between IMGA and MOGA will conclude on Dec. 1 at Oakwood after the play on Nov. 29 at Ironwood. The ante has been raised, as the competing golf associations agreed to purchase a trophy that will be awarded to the winning team.

IMGA Board Items: Wayne Karp reported the new IMGA website is up and running, and he’s received many positive comments. He wished to express appreciation to Fred Smith for his assistance with the new site. Dick Winkelman added that he’s seeing a steady flow of sign-ups for CY2023 using the new web process.

It’s not often that an individual is recognized two months in a row. However, Dan Jonker is special, having served over 10 years on the IMGA Board. Dan received a special trophy from IMGA Board President Bob Clark in recognition of his service to IMGA.