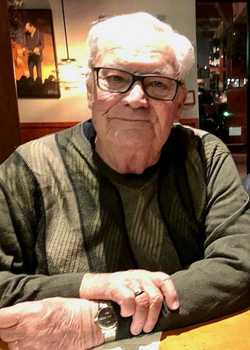 He moved with his family to Red Oak, Iowa, in 1945 and graduated from high school with the class of 1957. On Dec. 28, 1958, he was united in marriage to Kathryn Marie Freed at Fremont Lutheran Church, Nyman, Iowa.

He graduated from Northwest Missouri State University in 1961 with a Bachelor of Science degree and was a member of the Phi Sigma Epsilon fraternity. He and Kathy moved to Pocahontas, Iowa, after graduation where he was a coach and teacher for four years. In 1965 he left the teaching profession and formed a partnership with Jim Fitzgerald that became Burns Fitzgerald Realtors. He was on the Pocahontas Community Hospital board that built the present hospital in 1967 and was instrumental in forming a group of investors to build the present day Pocahontas Manor Care Center in 1970. Later he became the sole owner of that facility until he sold it in 2012.

In 1985 they moved to Mesa, Ariz. He was a past member of Mesa Country Club, Iron Oaks of Sun Lakes, and current member of King of Glory Lutheran Church in Tempe, Ariz. He and Kathy moved to Sun Lakes, Ariz., in 2010 where he enjoyed golf until his health declined. For the last nine months they had lived at Robson Reserve where he established many new friendships and his love of playing bridge.

He was preceded in death by his parents, brother Roger Burns, and his sister-in-law Charlene.

His love of people, college football, Iowa State University, Kansas City Chiefs, and family will never be forgotten. His greatest legacy was having never known a stranger.

In lieu of flowers, memorials may be directed to American Heart Association or your favorite charity. 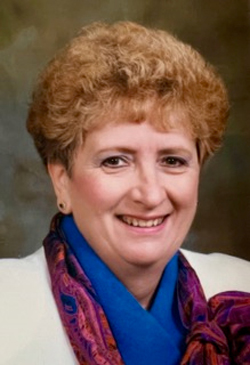 She was born in Nebraska to Harold and Lillian Knople on Sept. 3, 1938, the youngest of six children. In 1956, she graduated from Peru State Teacher’s College with her high school diploma and in 1959 was awarded her Bachelor of Science in Education from Nebraska State Teachers College. She initially taught in Nebraska and after moving to Iowa, taught for the Davenport Community School District until her retirement in 1994, after which she continued her passion for teaching by often substituting. When not teaching, she managed her own catering business and enjoyed cooking throughout her lifetime.

She was previously married to Marlin Danielson. In 1979 she married William Cusack and they were long-term residents of Scott County, Iowa, until they relocated to Arizona to enjoy retirement and involved themselves in a myriad of activities; working the Milwaukee Brewers spring training games, NASCAR races, hockey games, renaissance festivals, and many others. Nadine was also a member of the Sun Lakes Coloring Club, leaving us many pretty colorings to enjoy.

Nadine is survived by her husband, William Cusack, her children; Randall (Teri) Danielson, Jeffrey (Diana) Danielson, David (Mary) Danielson, and her stepchildren: Robert (Georgann) Cusack, Kathy (Mark) Lohrding, Scott Cusack, and Debbie Fifer. Nadine was preceded in death by her parents, her siblings, and a granddaughter.

A Celebration of Life gathering will be held on Saturday, Dec. 3, 2022, at the Unitarian Universalist of the Quad Cities, 3707 Eastern Avenue, Davenport, Iowa. Drop in between 1:30 and 3:30 p.m. to enjoy this time of reflection on the life of Nadine Danielson-Cusack. In honor of her love of cooking and providing good food for others, memorials can be made to the River Bend Food Bank or bring a food item for donation. 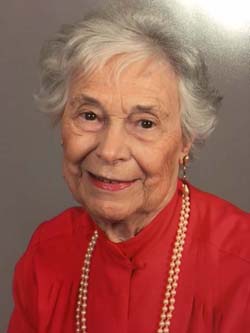 Gladys B. Galvanoni passed peacefully at 99 years young in Chandler, Ariz. She independently walked stairs and lived on her own until her final month of life. Gladys’s love and life purpose was dedicated to her family and church.

Together with her beloved predeceased spouse of 67 years, Aldo Galvanoni, Gladys lived in New Jersey, New York, Kentucky, Virginia, Michigan, Ohio, and Arizona. They moved to Sun Lakes in 1994.

Born in West Hoboken, New Jersey, Gladys is predeceased by her sisters Mercedes Franco and Dorothy Cuono. She is survived by her dear brother Guy C. Bosetti of Midlothian, Va., as well as fondly remembered nieces and nephews and their spouses and children in various states.

Upon completion of her education at Ladycliff College (BA) in New York, and Columbia University (MA) in New York, Gladys taught high school art, history, and English. She declined opportunities to teach at a university level in order to stay home full-time as a wife and mother.

Gladys’ additional interests were AAUW, Red Hat, book clubs, cooking, sewing, music, ballroom dance with her husband, and supporting Aldo throughout his career. Aldo is remembered for organizing Aero Clubs in Cincinnati, Ohio, and Sun Lakes, Ariz. She is fondly remembered by many as “a sweet lady.”

In lieu of flowers, donations may be made in Gladys’ memory to Saint Vincent de Paul Society, any location, any method.

Both Gladys’ funeral mass at Saint Stevens and a Celebration of Life at Robson Reserve took place in Sun Lakes in early November 2022. 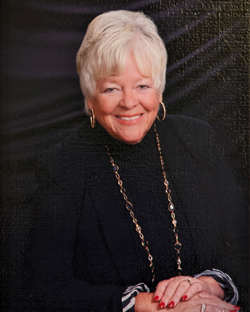 Judith was born Jan. 27, 1939, to Joe Ross and Cynthia Walker in Malden, a small town in southeast Missouri. She had an idyllic childhood and was involved in everything, from singing in the school choir, playing piano, writing for the school newspaper, and cheering on the Malden Green Wave with three of her best girlfriends.

After graduating from high school, she attended Lindenwood College for Women for one year and then transferred to the University of Missouri. She became a member of the Tri-Delts (Delta Delta Delta) sorority and met Richard Horn, a Phi Delta Theta who stole her heart. After graduation, they married and spent the next 61 years together.

Judith taught elementary school for the majority of her working years. In retirement, she was seldom without a book in hand and loved bridge, tennis, and spending time with family. The pride of her life was her two sons, Ted and Joe, as well as their wonderful families.

She was preceded in death by Richard Horn, her loving husband, and leaves behind her sons Ted (Jodie) and Joe (Andrea) and six grandsons, Colton, Brayden, Palmer, Walker, Brecken, and Graysen.

In lieu of flowers, the family requests a donation to Happy Tails No Kill Animal Shelter, www.happytailsnokillanimalshelter.com/donate. 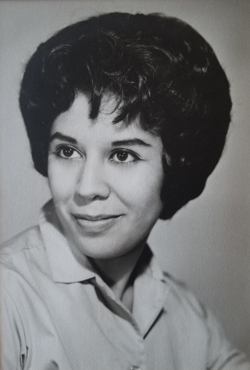 Antoinette “Toni” Muro (née Oliveros) born March 4, 1940, passed away on Nov. 6, 2022. Toni, as she was known by friends and family, graduated from Fontana High School in 1957. She was only a junior at the time but had gotten ahead in her credits due to a bad car accident that forced her to spend a year at home in bed. One of the books that she read that year had pictures of lighthouses on faraway islands off the coast of New England, and this sparked an interest that would never fade.

After high school Toni worked as a telephone operator for the Pacific Bell Telephone and Telegraph Company in downtown Los Angeles. It was around this time that Toni met a young man named Daniel Muro at party. She stood him up on their first date. But Dan was not dissuaded and eventually the two were married on Feb. 27, 1965. Five years later Toni would give birth to a son, Daniel Christian Muro.

Shortly after their marriage Toni learned that her husband had kidney disease when he suffered a heart attack and nearly died from renal failure. For the rest of his life Toni was Dan’s chief medical advocate. As his ability to work became less and less she took on the role of bread winner for her family. Working first as a real estate agent, and later as a secretary, Toni rose quickly through the ranks of the secretarial pool and soon was working for an assistant superintendent to the San Bernardino Unified School District.

But, the most amazing thing of all is that Toni’s life really began at age 60 when she followed her dream and moved to live on Peaks Island, off the coast of Portland, Maine. Sadly her husband was unable to join her as he passed away from cancer in 2001, but her 14 years on Peaks Island was, without a doubt, a high point.

Due to progressing lung disease Toni moved to Sun Lakes, Ariz., where, with the help of her niece Virginia Jenkins, Virginia’s husband Bill, her great niece Trisha Alder, Trisha’s husband John, and all of their children she led a full life surrounded by family.

Toni is survived by her son Daniel Christian Muro, his wife Joane, and their daughter Sofia, whom she absolutely adored. Toni also is survived by a sister Kathi Mills in Florida. 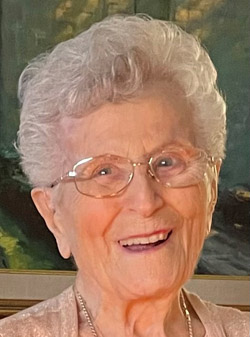 Gloria Josephine Fanning Petriello passed away peacefully on Oct. 16, at the age of 99 in Chandler, Ariz. The daughter of John and Helen Fanning (Riccio) of Bridgeport, Conn., she was raised by her grandmother, Agnes Altieri, and aunt and uncle, Ann and John Hodgins from age 4, following the death of her mother. She graduated Harding High School class of 1941, and worked in the aviation industry for Sikorsky Aircraft during the war and later medical offices and libraries in Connecticut. She met her future husband, Anthony “Tony” Petriello, in high school. They later reconnected after WWII, fell in love, and married in 1948. They celebrated their 74th anniversary in April 2022.

Gloria and Tony enjoyed traveling, exploring the United States and Europe. They drove cross-country to Arizona for several years as snowbirds before moving to Sun Lakes in 1994, where they enjoyed wonderful friends and dancing at the Sunday Night and Cotillion Dance clubs. She was a longtime member of Beta Sigma Phi, loved to play cards and Mexican Train, and enjoyed golf with the Oakwood Lady Niners and Ironwood Lady Niners.

Gloria was always bright and full of life, a great cook and hostess, and will be missed by her many friends and family. Sadly, Tony died in April this year and their treasured son, Robert, predeceased his parents in 2010. She is survived by her cherished granddaughters, Laurel and Deanna (Dan), adored great-grandsons, Dominic and Luca, and by brothers-in-law, Michael (Sheila) of Sun Lakes and Bart of Trumbull, Conn., her sister Eileen, cousin Joanne, and many nieces and nephews.