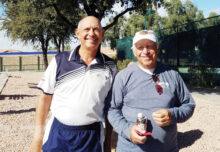 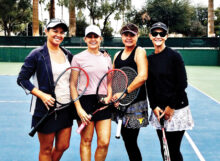 The IronOaks tennis courts saw lots of action recently, as the 2021 Gender Doubles Tournament took to the courts from Jan. 18 to 23. Open only to members of IronOaks Tennis Club, the tournament drew 24 men and 32 ladies who competed in 42 matches over the week.

The highlight of the week was the Saturday finals of the eight-team Round Robin Men’s Division 2 and Women’s Division 1, which drew a large crowd of socially-distanced observers.

In the Men’s Division 2 Finals, Mike Davin and Wayne Newman were winners over Jim Utter and Jerry Geiszler. The Women’s Division 1 Final went down to the wire, with newcomers Michelle Cohrs and Mary Crump winning in an exciting third-set tiebreak over Barb Jorgenson and Bonnie Greco.

Other winners in the four-team Round Robin categories were: