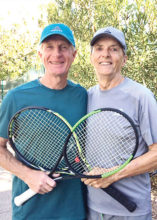 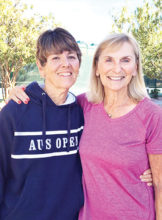 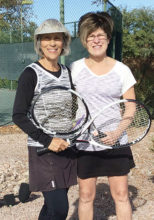 Athletic excellence, high drama, grit, blood and the thrill of victory, the agony of defeat… it was all there in the IOTC Gender Doubles Tournament three weeks ago. Tension ran high as three divisions battled over five days to crown the reigning doubles champions for both men and women.

In Division II, both championship matches went to third set tiebreakers as Jake “The Snake” DeMoss and Jerry “King of the ER” Geiszler outlasted Jim Utter and Mike Davin for the men’s trophy after losing the first set 6-0. For the fairer sex, eventual champions Terri Vasquez and Jeri Schulz also managed to lose their first set to Judy Gahide and Linda Shanahan before coming alive in the tiebreaker to pull out the victory 10-3. The drama on both courts glued spectators to their seats, and a hush fell over all of Sun Lakes as the gladiators fought to the death on their respective courts.

The Division I championships paled in comparison as Warren “The Assassin” Kutchyera and Bill “Sandbag” Cunningham brought down Mike Corey and Tom Snider in straight sets, 6-4 and 6-4. The women’s contest was worse than a snoozer due to an injury to the team of Michelle Mather and Barb Jorgensen which gave the prize money and year-long admiration to Darlene “How’d She Get to That?” Brasch and Karen “Oh Canada” Kutchyera. Suspicions of foul play were quashed by… ahem, tournament Co-director Darlene Brasch. The investigation is ongoing at publication time.

The highlight of the tourney will be the publication of this article which will give all the finalists scrapbook material and bragging rights to their grandchildren, and not much else, since nobody reads past the headlines and the captions on these types of articles. Anyone who reads this far is duty bound to report to tournament Co-Director Darlene Brasch that her husband should be banned from ever being required to do this type of article again. Thank you.