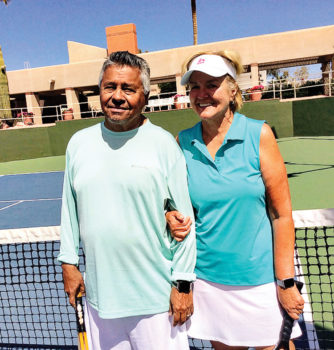 Jerzon and Kim Vargas started with the free classes, and now both are dedicated players.

Last month, Cottonwood Tennis Club (CTC) featured Donna and Keith Nelson. This month, the featured couple is Kim and Jerzon Vargas. They are newbies to the joy of tennis. Neither had played in earlier life and were starting from scratch. They’ve lived in Sun Lakes for seven years. Both are rated at the Blue level, so they are eligible to play together in tournaments and on Friday mixed doubles schedules. In addition to their Sun Lakes home, they have purchased a summer place in Show Low, Ariz., where several other Sun Lakers have summer homes.

Kim is from Iowa, but has lived in Arizona for 61 years. Jerzon was born in El Salvador. He has been in the U.S. since 1980. Both worked for the City of Phoenix, and that’s how they met. Jerzon worked on computerized phone systems for 52 years. Kim ran a 24-hour call center for the City of Phoenix. During their working years, both were “on call” 24/7. So when they moved to Sun Lakes, they took some time off to get settled. Before Phoenix, Jerzon had also spent some time residing in New York. Other members of their families live in New York and Mississippi.

Kim and Jerzon became “tuned in” to tennis at the free classes offered by Cottonwood Tennis Club on Monday and Tuesday evenings. Kim joined CTC three years ago, but Jerzon couldn’t at that time because he was still working. He joined two months ago and plans on playing a lot now. Kim has participated in the Wednesday leagues, entered two competitions, and has continued to improve her play.

They also participate in pickleball. Jerzon likes disc golf. Kim enjoys playing mahjongg. Both love to travel. Their most recent trip was to Normandy, France. A good thing they got back prior to the virus lock-down.

This summer, they will travel back and forth between Show Low and Sun Lakes. There are tennis games to be played in both places. We wish them luck when the fall season comes around.