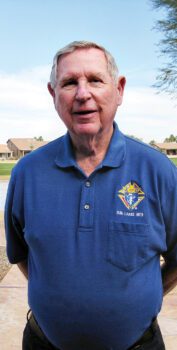 Brother Lawrence (Larry) Edwards has been an active leader in the Knights since he joined the order 18 years ago. He has served ably as Grand Knight, Faithful Navigator of the Fourth Degree Assembly, Financial Secretary, Chancellor, and on numerous committees responsible for conducting the Council’s many service activities, including the Honor Guard, family breakfasts, soccer challenge, flowers for Mother’s Day, donut Sundays, and roadside cleanup. “I joined the Knights to make new friends and to give back to the community!” he said.

A native of Chicago, Larry graduated from Weber Catholic Boys High School and earned his B.S.E.E. degree from the University of Illinois, and an M.B.A. from Northwestern University. His employment record includes: manufacturing engineer for Western Electric Hawthorne Works, sales and marketing for several Chicago-based manufacturers, regional sales startup for Modicon industrial automation systems (in Portland, Ore.), design engineer for Industrial Design Corporation Portland, lead engineer for special electrical systems at Intel Fab 22 Project in Chandler, and project manager and department head for Damon S. Williams Associates, where he designed electrical control and distribution for municipal water and waste facilities at municipalities in the Phoenix area. Larry is a registered electrical engineer in Arizona, California, Colorado, Oregon, Texas, and Washington. He retired in 2015, but continues to consult on “interesting challenges.”

Larry and his wife of 56 years, Cyndy, have four children and 10 grandchildren, who are located in Portland, Ore., and Chandler. “We met at a sock hop in 1957 at Weber High School, where Cyndy and other students from the nearby Alvernia Catholic Girls School were special guests. I knew then that she was my soul mate!” he explained. In addition to visiting their children, the Edwards are pursuing happiness through long walks, playing golf and tennis, and service in the Knights of Columbus and Ladies Auxiliary! Larry encourages all Catholic men to consider joining the Knights. For information on membership opportunities in the Knights, contact Grand Knight Ken Ford at 480-216-6808.