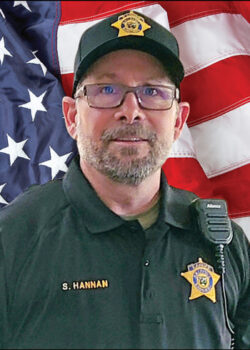 C. Scott Hannan is one of several recent recruits in the Arizona Rangers-Sun Lakes Company. Scott joined the Sun Lakes Rangers in order to give back to his community. He is convinced that having a visual law enforcement presence is a deterrence to crime and, consequently, makes the community safer.

Scott was born in Germany on a U.S. military base. His family then moved to Alabama, Arizona, Texas, and back to Arizona for good when he was 10 years old. He is a self-described Air Force brat.

Scott is currently a manager in the College of Information Technology at Western Governors University. He is working towards an MBA.

In addition to his full-time job and Ranger responsibilities, Scott is the president of his neighborhood HOA and volunteers on his church’s security team. Scott loves watching his kids play sports and is an avid gardener who grows eight types of vegetables for his family.

If you would like more information about the Arizona Rangers-Sun Lakes Company, contact them at [email protected]