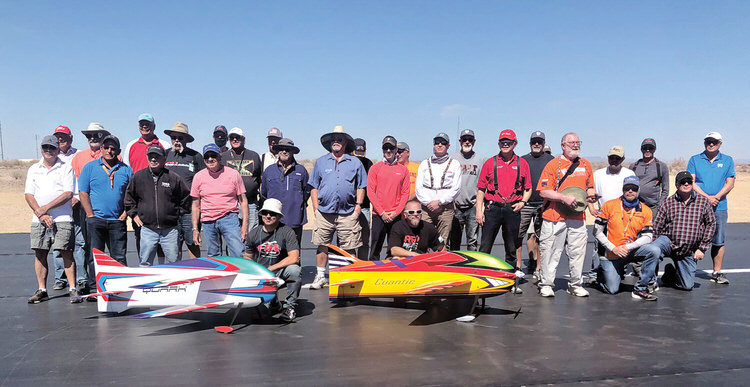 The club’s first competitive event in 2021 was held on March 6 and 7 at our flying field. The event was the Eighth Annual Desert Pattern Challenge, and pilots from Argentina and Venezuela participated, along with pilots from the States of Georgia and Washington, plus several other states. A total of 30 competitors participated, including three from the Sun Lakes club.

The “pattern” event is a competition on how precisely a pilot flies prescribed maneuvers, including loops, rolls, and a multitude of other aerobatics. Several pilots in the competition are members of their respective country’s model airplane team. The pilots’ background includes people with no full-scale aeronautical background or experience, up to active airline and private pilots.

The competitors fly four preliminary rounds followed by two final rounds, and they are judged on their accuracy of flying a prescribed set of flight patterns. There are four levels of competition, starting with Sportsman that include people just starting in the competition, to the Masters level. Pilots in each level fly the same maneuvers and are judged by how precisely the airplane adheres to the pattern of the maneuver within a “box” defined by upper and lower altitude limits and left to right horizontal limits. Typically, the airplane flies at 60 to 75 mph when performing, except for a stall at the top of a vertical climb, which is 0 mph. Maximum speed for the airplanes is close to 100 mph.

The airplanes have to meet the requirements for “pattern” aircraft set by the Academy of Model Aeronautics, with a length of two meters (6.5 feet), wingspan of two meters (6.5 feet), and a weight not to exceed five kilograms (11.02 pounds). Only one pilot flew a “gasoline” powered airplane, while all the other aircraft were powered by electric motors and lithium batteries. The battery-powered airplane motors produce about three horsepower. The cost of the planes, including all electronics, ranges from $2,000 up to $8,000.

For additional information, check out the Sun Lakes Model Airplane Club website at www.SLRCC.org or the club Facebook page, Sun Lakes RC Club (SLRCC), including membership and upcoming events as well as past activities.

Recently, ABC-15 made a documentary on how our club is coping with the coronavirus. The video, which aired Feb. 14, 2021, can be found at www.abc15.com/news/rebound/coronavirus-stress/sun-lakes-remote-control-club-helps-newcomers-find-passion-in-hobbies.