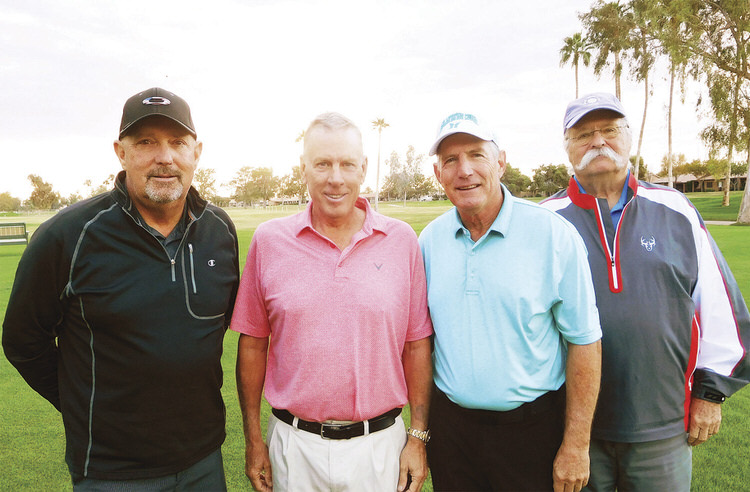 New MOGA Board: We are pleased to introduce the new 2023 MOGA board:

We thank these gentlemen for stepping forward to take on these leadership roles!

Holiday Dinner and Dance, Friday, Dec. 16, at the Oakwood ballroom

For more information, go to www.mogagolf.org.

First Place Winners in Their Flight:

Membership Renewal: Be sure to renew your membership before Dec. 15 to avoid being locked out of Chelsea. You can easily do so at www.mogagolf.org.

Getting to Know Your New MOGA Secretary – Vic Russelavage

Growing up in Washington, D.C.; England; and Hawaii in a military family and with an early desire to play trumpet like his hero Louis Armstrong, Vic Russelavage’s combination of talent and hard work earned him the distinction of playing in the very first McDonald’s All-American High School Band and playing in the Macy’s Thanksgiving Parade and various New York venues. This etched his future in stone.

Vic and Diane met in high school in Hawaii and will be celebrating 50 years of marital harmony and bliss in January, and their greatest gifts to the world are two incredible sons and five remarkable grandchildren.

After studying in a Washington, D.C., music conservatory, he had the opportunity to play with many of the greatest musicians of the day, across all genres of music, for several years.

During this time, he also went to work learning how to make brass and woodwind instruments look and play their best in a highly regarded pro repair shop, earning the tongue-in-cheek nickname “Golden Hands.”

With family roots in Colorado Springs, Vic and family moved to Colorado and opened their own music store and shop in 1979, focusing mostly on guitars and stringed instruments. Vic began a fast-tracked career with Gibson Guitar Company in 1993 and ultimately became Worldwide Chief of Global Sales. During his 24 years at Gibson, he was blessed to be able to see much of the world, learn new cultures in depth, and make lifelong musical friends around the world.

Last year, Vic and Diane transitioned from being snowbirds (since 2013) to full-time Sun Lakes residents.

He plays as much golf as possible, reads as much history as he has time for, and serves as president of the Handsome Men’s Club. Future projects include getting back into playing his trumpets and guitars and building a small woodshop.

We thank Vic for assuming the responsibilities of MOGA secretary!