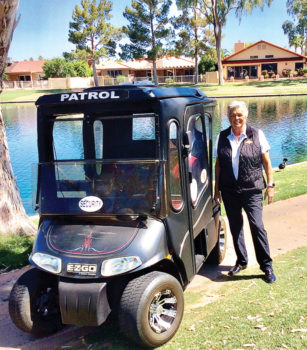 Shirley Pierini came to Sun Lakes in 2016 after a long career in police work and private security. She was recently named Patrol manager for HOA  2, Cottonwood/Palo Verde. She fell in love with police work when she joined the Bellview, Wash., Police Department in 1969. “Once you experience it, it’s in your blood,” she said.

In the early 70s, she worked in the San Diego Police Department, first as a communications officer, and then on the street as a patrol officer. She was assigned to a command van which responded to critical incidents such as shootings, border wars, and strikes (Imperial Valley farm workers strike led by Cesar Chavez.)

Later, she moved to Reno and a job in private security at the MGM Casino. She worked her way up to sergeant, then house detective, discovering that she liked the private security sector. “You are not trying to arrest anybody. You are trying to prevent the crime before it gets started.”

In the early 1980s, Shirley became an armored car driver for Brinks Inc. After assisting the road manager in charge of tactical planning, she wanted to stay in management, so she worked to get a CPC (Certified Protection Certificate). In 1988, she completed her BA degree and was valedictorian. In 1990, she earned her MBA in business administration and again was valedictorian of a class of 3,000-plus.

Bank of America (B of A) hired Shirley in 1984, moving her into the field of Executive Protection. She worked for three executives who delightedly found she could easily travel incognito. “Although I was armed,” she said, “I didn’t look like a bodyguard. I looked like a secretary or female executive.” The following year, B of A assigned her to the development team to create a disaster management plan (DMP). She urged the CEO to run a test. He declined. Ten days later, the 7.1 Loma Prieta earthquake struck the region. The untested DMP worked, and she was awarded for the plan she put in motion.

In 1999, she became VP and manager in charge at Guardsmark. Then in 2000, she was back to LA as director of executive protection for Kroll Inc. In 2003, she took the position as VP of corporate security and safety for Ameriquest Mortgage Corp. of Orange County.

Shirley joined ASIS, American Society for Industrial Security, in 1984. She became a board member in 1998, then treasurer, secretary, vice-president, and then president in 2004. “I attended my first seminar in 1988, and I haven’t missed one since.”

“After moving to Sun Lakes, I found my home,” she said, “and I’ve been blessed with the best job ever as patrol manager in charge of all patrol officers, gate officers, and the employees at our Fitness Center.”