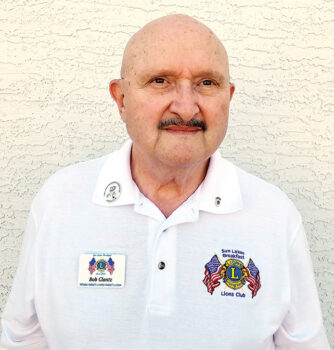 As first Vice President of the Sun Lakes Breakfast Lions Club (SLBLC), Oakwood resident Bob Glantz knew that part of his duties was to fill in for the president of the club, Rich Iovino, whenever needed.

So when the call came that Iovino, 65, had suddenly and unexpectedly passed away in mid-June, Glantz was named acting president.

Following CDC guidelines, the SLBLC had already suspended their monthly meetings and then began their regularly-scheduled summer hiatus. After consulting with the Lions Club International, an email vote was taken by the membership, and Bob was elected president.

Glantz is a 20-year Army veteran and was awarded many degrees, professional certificates, and medals during his military career.

After his retirement, he and his wife Kay (who serves as the SLBLC treasurer) moved to Arizona where Glantz worked for McDonnel Douglas, subsequently retiring from both Boeing and Alliant TechSystems.

Glantz and his wife are both past recipients of Lion of the Year awards for their tireless charity work within the greater Sun Lakes community.

“The Lions Club has provided my wife and me with a way to give back to our community. To paraphrase President Kennedy, Ask not what your community can do for you, but ask what you can do for your community.” Glantz added, “No one likes to become president of our club under such sudden and sad circumstances, but I will do my best to continue Rich’s work and lead our Sun Lakes Breakfast Lions Club through these very uncertain times.”

For further information on the Sun Lakes Breakfast Lions Club, contact us at 480-242-4356 or email us at [email protected]