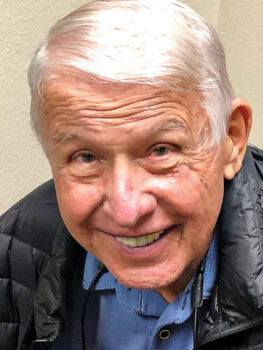 For many seniors, deciding to stay in their house or taking the leap and moving into a senior living community can be a very difficult decision. For one particular person, the decision became very clear after the death of his beloved wife of 55 years, Ruth.

Frank and Ruth Szyszkoski moved to Sun Lakes 20 years ago from a suburb outside of Detroit, Mich., to escape the “cold, drab, gray weather in search of sunshine.” Frank and Ruth settled nicely in sunny Arizona where they enjoyed watching the bunnies and quail frolicking each day in their yard and where Ruth actually taught Frank how to golf. They both shared a wonderful life full of love, food, travel, and exploring the world on their many excursions where they had particularly fond memories of trips to Ireland.

When Ruth fell ill and ended up passing away earlier this year, Frank found himself alone and felt isolated. Factoring in the COVID-19 pandemic, it made it especially difficult for him not being able to see friends or get out and join new groups, since everyone was quarantining.

After stopping into Renaissance on a whim, Frank was surprised to see how lively the community was and how spacious the apartments were! One apartment that recently became available was overlooking the courtyard to the pool with lots of lush greenery. Therefore, he decided to give it a shot, put his house up for sale, and put a deposit on that apartment.

It has been almost two months since Frank moved in, and he said, “Moving here was one of the best decisions, because Renaissance saved my life. If you want to be around people, you simply step out of your apartment and see people. And everyone, including the staff, has been very warm and welcoming. There is always someone to talk to.” Although Frank and Ruth had no biological children of their own, Frank stated he was father to “thousands of kids” from his years of being a high school librarian back in Michigan. Therefore, he particularly loves talking to the teenagers who work as servers in the dining room. “I don’t know where they found these kids, but they are just the nicest, most polite teenagers!”

Even though it has been a short time since Frank moved to Renaissance, he has already touched the lives of so many residents and team members with his friendly demeanor, warm smile, and positivity. It’s people like Frank who make Renaissance the wonderful community it is!

If you would like to learn more about Renaissance Senior Living, please call 480-883-2000 and ask to speak to one of our sales counselors.