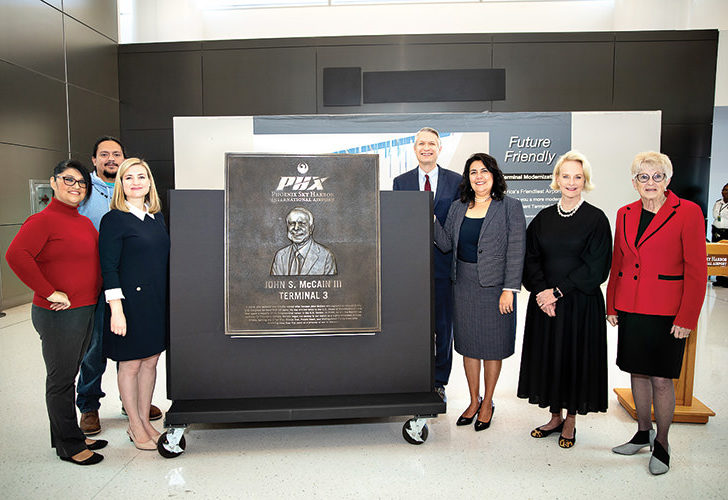 Phoenix city officials and dignitaries recently celebrated the last phase of the Terminal 3 Modernization Program by unveiling a plaque honoring the late U.S. Senator John McCain of Arizona, whom the terminal was named after in 2018, and opening the newly-renovated North Concourse.

The first phase of the project was completed in 2016, while the second phase finished last year.

The final stage of the modernization effort includes a redeveloped north concourse that features 10 airline gates and new shops, restaurants, and customer amenities such as an animal relief area, a nursing room, a family restroom, hearing loop connectivity in the gates areas, and access to power from every seat.

New restaurants include Ajo Al’s, Scramble, and The Phoenix Beer Company. These restaurants represent local favorites and give visitors to the airport a sample of what the area has to offer.

New shops include Discover Arizona with Tech-on-the-Go/House of Marley and Stellar New + Market with Starbucks.

Like the previous two components of the Terminal 3 Modernization Program, the north concourse offers scenic views of Phoenix’s desert landscape and an abundance of natural light.

Travelers will also find an impressive public art installation in the north connector bridge. The piece features 750 reflective blue and gold aluminum cells that amount to a light-gathering beehive along the west wall of the bridge.

The Terminal 3 Modernization Project was paid for through airport revenues, such as parking, concessions, and tenant fees. No local dollars were used.