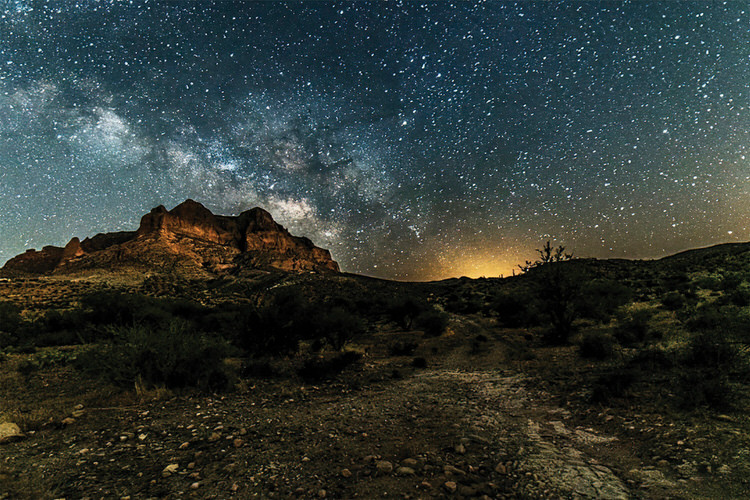 Normally at this time of year, Arizona is awash in a beautiful array of wildflowers. Unfortunately, due to the lack of rainfall during the month of February, our wildflower season has been delayed or, in some instances, shut down entirely. Picacho Peak State Park is perhaps the best-known place in the state to see and photograph spring wildflowers. The park’s website has reported much lower blooms than normal. Lost Dutchman State Park has not done much better, with very sporadic and hard-to-find splashes of color. Many of the new buds were apparently killed off during the February 22 and 23 late-winter storm that hit the area.

While SLCC does not meet regularly during the summer months, there are some activities planned for that period that will be available to the membership.

August 25 is the date tentatively set for a return to Picketpost Mountain for a Milky Way shoot. This excursion will once again be led by member Tom Jones. Tom has led these trips before and is always available to offer help and suggestions to attendees who perhaps have less experience with astrophotography. Last year’s trip to the same location in May produced a number of fine images by our members. One of these photos, entitled Picket Post Mountain Milky Way, is presented in memory of our member Herman Dirks who passed away in November of 2021. Assuming that the weather cooperates, this year’s August date should be a bit more comfortable in that the nighttime temperatures ought to be warmer than in May. The timing of the shoot should also be somewhat more convenient in that the Milky Way appears earlier in the evening in August than it does in May.

Carol McDonald will be presenting a class on Working with Textures on Thursday, September 15. We will learn how to use various textures in the background of our images. The time and location for that presentation will be announced later.

The Sun Lakes Camera Club meets the first and third Thursdays from 6:30 to 8:30 p.m. in the Mirror Room of the Sun Lakes Country Club from October through April. For more information about the SLCC and its activities, contact SLCC President Samantha (Sam) Palmatier at 902-727-0334 or [email protected] or Past President Lynn Thompson at 480-734-0040 or [email protected] and visit our website at www.sunlakescameraclub.com.