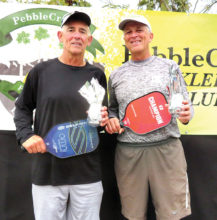 Janice Golden, Cottonwood, and Natasha Thompson won the silver medal in the 4.5 Women’s Doubles at the Sunland Springs Pickleball Tournament. 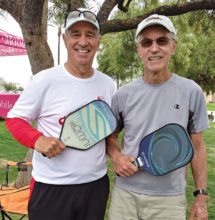 Steve Smitham, IronOaks, and David Moore of Westbrook Village won the Bronze Medal in the 4.0 70+ Men’s Doubles at the Fun in the Sun Tournament in Sun City West. 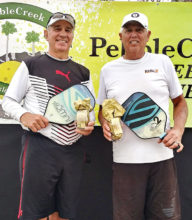 Steve Smitham, IronOaks, and Dennis Fox, Sun City, won the gold medal in the 4.5 70+ Men’s Doubles at the PebbleCreek Tournament.

Jerry Strom and Keith Ori from Cottonwood were the winners of 3.5 60+ Division in the 2019 Dual in the Desert in Casa Grande, AZ.

Left: Ron Robinson and Janice Golden, Cottonwood, won the silver medal in the 4.5 65+ Mixed Doubles in the El Mirage Tournament.

If any Sun Lakes resident has won a medal in a pickleball tournament and would like it to be added to the “Pickleball Winner’s Corner,” please send photo, name of the tournament and division to Janet Myrick, [email protected]