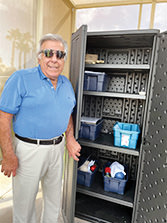 One of the major improvements for Sun Lakes Bocce Club members is the installation of a new cabinet for storing bocce balls located within the shaded enclosure at court No. 2. Shown with the cabinet is John Terranova, club president. (Photo by Gary Vacin)

After last year’s hiatus from the game due to COVID-19, the Sun Lakes Bocce Ball Club kicked off the 2021-22 season with our annual Wine and Cheese event held at Sisk Park on Oct. 24. Nearly 170 Sun Lakes residents, including 36 new players, registered to play the first session. Club members were welcomed with introductions of the 2021 board members and the many improvements that have been initiated by the board over the past year. This includes the club’s website, www.sunlakesbocceball.com (which most used for the first time to register and pay their dues), movement of the bocce balls from the cabinet in the Ramada to a new cabinet located within the shaded enclosure at court No. 2, a Training Committee containing “A” and “B” players provided by the board for instruction and guidance to all who may want or need their help, the addition of spectator benches located alongside bocce courts No.1 and No. 4, and the drafting of a new informative document entitled “Club Play – How it Works.” This introduces the game to new players, while defining all the details of the game, as played by the club here at Sun Lakes, to all our members.

All new players to the game, or those who require it, can request instruction by the Training Committee by forwarding an email to the attention of the membership director at [email protected]

The Sun Lakes Bocce Ball Club, the board of directors, and members thank the Cottonwood Palo Verde Sun Lakes Homeowners Association for their cooperation and assistance in completing many of the previously mentioned improvements. Without them, the improvements would have been impossible to achieve.