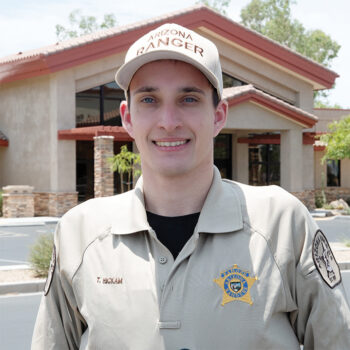 Newly-sworn Ranger Tyler Hickam joined the Sun Lakes Rangers after serving four years with the Maricopa County Sheriff’s Office Posse. Tyler has a passion for law enforcement and believes what Winston Churchill so eloquently stated, “You make a living by what you get. You make a life by what you give.” Tyler is originally from Southern California but has lived in Arizona for seven years. He has a Bachelor of Science degree from Arizona State University and is employed as a software engineer. In addition to patrolling our Sun Lakes communities, Tyler is part of the company communications team which coordinates the radios. Despite the fact most of us are bombarded with disheartening news stories every day, Tyler volunteers as a proactive way of doing something to make the world a better place. In his spare time, Tyler plays video games, spends time with friends, and loves to visit his grandparents. If you would like more information about the Arizona Rangers-Sun Lakes Company, contact them at [email protected]