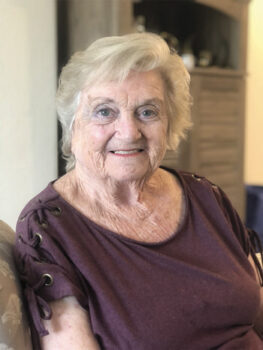 The number one reason why Robson Reserve at Sun Lakes is such a wonderful place to live is simple—it’s the residents! Meet one of our newest and happiest residents, Sandy Schmalzback. Sandy was born in Sussex, N.J., and moved to Chicago 15 years later, where she eventually met her first husband. Together they had two beautiful daughters, Debbie and Beth. In 1970 they moved to Scottsdale, Ariz., after they decided to pass on a lot they purchased in Lake Havasu. It was then that Sandy started working for the Army Corps of Engineers as assistant to the colonel. She cherished and thrived during her time there and loved hosting parties and learning new skills.

After a brief move to Kansas City, Sandy moved back to Arizona and worked for the Immigration and Naturalization Service in the Investigation Department and said she has “a ton of good stories about that”! She decided to create a Jewish singles group, and that is where she met the love of her life, Richie Schmalzback. They had a wonderful life together, moved to Florida where they bought a boat, and traveled in their motorhome. After 15 years together, sadly, Richie succumbed to lung cancer, so Sandy sold the house and moved to Hilton Head, S.C. Yet, once again, Sandy found herself back in Sun Lakes to be closer to her daughters. Sandy loves Sun Lakes and has many friends and feels a deep sense of community, including being on the board of New Adventures in Learning, and sings in the Sun Lakes Jewish Congregation choir.

When asked what the turning point was to make her consider moving into Robson Reserve at Sun Lakes, Sandy said, “I’ve always known about it but was happy in my home.” Then one unfortunate day, Sandy was in an automobile wreck, and she realized she should not be driving anymore. That is when Sandy decided to “turn a negative into a positive,” and checked us out. She also said, “I wanted to save my daughters the dreaded talk of the next steps in life.” The second Sandy walked through our door, she has emulated nothing but happiness and gratitude. When asked what her favorite thing about living here, it comes to her very easily: “It’s the staff and the fact that I don’t have to do anything, because they do everything I don’t want to do!”