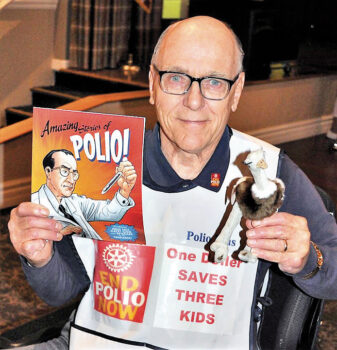 It is with sadness that the Rotary Club of Sun Lakes (RCSL) heard of the passing of Harold (Hal) Wochholz. Hal had been an RCSL member for 19 years after he moved to Sun Lakes from Mesa. Harold (Hal) Wochholz, 90, of Sun Lakes, Ariz., and more recently Portsmouth, N.H., passed away peacefully on Sunday, Sept. 19. He was predeceased by his beloved wife of 67 years, Phyllis Wochholz, and leaves his son Hetz Wochholz and his wife Sandra of Portsmouth, N.H.; daughter Julie Pollard and her husband Michael of Farmington, Conn.; five grandchildren; and three great-grandchildren.

Growing up in Michigan, Hal graduated in 1949 from Albion High School having had great success playing football, basketball, and baseball. While at Purdue trying to make the football team, the Korean War broke out in the Summer of 1950. Hal enlisted in the U.S. Navy during those tumultuous years. While in the Navy, Hal got into electronics, setting up his pursuit of an electrical engineering degree at Michigan State University where he received Highest Honors upon graduation with BS and MS degrees in electrical engineering.

Hal had a rewarding 56-year professional career with major corporations involved in the fields of aerospace, rocket development, computers, electronic technology, and also serving as a college professor at the University of New Hampshire. He broke stereotypes by excelling as a computer design engineer for General Electric Company—sharing an “Engineer of the Year” award in the missile and space division. While VP at McDonnell Douglas Electronics Company of its Electronics and Flight Controls Division, Hal provided development support of the Apache Helicopter. He retired from the Valley’s Boeing Corporation. Hal first joined Rotary in the Boeing Employee Club, and then, after retirement, Hal and his wife Phyllis moved to Sun Lakes and joined RCSL. The RCSL was the sponsor to charter the first-ever Employee Rotary Club approved by Rotary International (RI).

It was during his navy service that Hal began his fight with polio. At first devastated by disease and then strengthened by determination, Hal’s positive attitude gave him remarkable perseverance for combating lifelong challenges. Hal, in his 20s as a new father, read Dr. Spock’s baby book. While reading one portion to his daughter where the symptoms of infantile paralysis were discussed, Hal said, “My gosh, I have all of those symptoms.” Hal went to a doctor at the local naval hospital who dismissed it as being a “stiff neck,” and sent him home. It got worse, so he returned again, and they concluded, “Yes, you do have polio.” They checked him in for the beginning of a lifelong battle for him and his wife Phyllis, his strongest teammate and ultimate caregiver. He has battled all of the usual ailments, aches, and pains of polio, and suffered from Post-Polio Syndrome. He was able to avoid the iron lung, but used crutches, canes, and an electric-powered wheelchair for all of those physically challenging years. He had his left leg amputated above the knee due to polio-caused poor circulation.

Hal became known in the Valley for his work as the “PolioPlus Poster Guy,” a title he had given himself in honor of those children in the 1930s/1940s who served as President Roosevelt’s poster children. Hal’s substantial efforts working to eradicate polio through becoming a leading force of Rotary’s End Polio Now drive are well known throughout the Valley and the worldwide Rotarian community. As committee chairperson, Hal raised sizeable funds in his RCSL PolioPlus program and RI’s Global Polio Eradication Initiative to effectively respond to the stop polio outbreaks. Hal served as the RI District 5510 PolioPlus Lead, making presentations at RI conferences; most of the Rotary clubs in the Valley; and to principals, teachers, student councils, and schools in the East Valley. Those activities resulted in Hal being designated 2010 Rotarian of the Year for RI District 5510.

As a part of Hal’s joining RCSL, Hal brought the CHOICES program. Ever since, RCSL has supported CHOICES, which has touched several thousand students attending Chandler, Gilbert, and Mesa high schools. CHOICES is a teaching program presented by RCSL for every ninth grader in the Chandler Unified School District. It’s a special program that is designed to help students make good decisions regarding their education and to see the impact of their decisions on their success in the future.

Hal was a proud supporter of both the Rotary International Foundation and the Sun Lakes Rotary Foundation 2000. With the RI Foundation, Hal was a Multiple Paul Harris, a Major Donor, and member of the Arch C. Klumph Society. Named after the sixth president of Rotary, the Arch Klumph Society recognizes The Rotary Foundation’s highest tier of donors—those who have contributed $250,000 or more during their lifetime. With the Sun Lakes Foundation 2000, Hal was a Legacy Guard Level 4 Major Donor and helped to start RCSL’s Endowment Fund for Education.

Hal and his wife Phyllis established an endowment to provide the Michigan State University (MSU) Resource Center for Persons with Disabilities (RCPD) with a source of funding to market MSU as a university with an exceptional and sustained record of success in meeting the needs of persons with disabilities. Hal, a 1958 graduate of the College of Engineering and RCPD 2007 Outstanding Alumnus, identified MSU’s accessible facilities as instrumental to the attainment of his engineering degrees and to his success as an engineer and aerospace leader. The Wochholz family’s generosity helps youth connect with vibrant futures via a quality MSU education.

Hal was a friend to many through his support of the Arizona Humane Society. Never one to be idle, his volunteer efforts supporting church and community endeavors followed him throughout his years.

Per the many Rotarians who knew Hal, this story is never ending. Hal’s many achievements and contributions to society and to Rotary International will be long remembered. A truly remarkable Rotarian called the “PolioPlus Poster Guy,” is Hal Wochholz of the Rotary Club of Sun Lakes, Ariz. What a privilege it is to have known, worked with him, and be inspired by him. Hal’s passion for living energized us all.

The family would like to thank the staff at Wentworth Senior Living for their care and compassion shown to Hal. In lieu of flowers, please join Hal in his fight to eradicate polio by making a donation to Rotary’s End Polio site at www.endpolio.org.