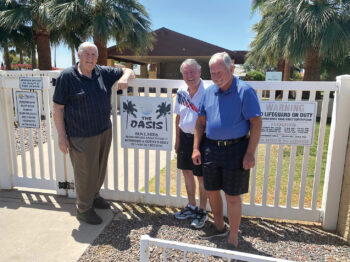 On Sunday, May 2, 30 members of the Scandinavian Club met at Oasis Park in Sun Lakes for a spring picnic. The event was designed by a planning committee, which met in mid-April to reactivate the group, after more than a year of inaction due to the COVID-19 pandemic. Originally billed as a “smorgasbord” (traditional Scandinavian feast), participants nonetheless brought their favorite covered dishes, making it an all-American “potluck” dinner! As was customary, set-ups, beverages, and the ubiquitous pickled herring appetizers were provided by the club.

After the meal, co-chairs Jerry Johnson and Maynard Iverson introduced the other members of the planning committee: Carol Jacobson, Bruce Folken, Connie Santwire, Carolyn Hawkins, and Butch Hall, and praised their contributions to the event. They encouraged the group to be active participants in the rebuilding process.

For the remainder of the meeting, those attending the picnic took turns explaining how they were connected to Scandinavia. Often mentioned were memorable trips made to their homeland(s) and the gratification they felt in meeting often unknown relatives at their ancestral homes in the five Scandinavian nations of Norway, Sweden, Denmark, Finland, and Iceland. Also frequently expressed were the welcoming responses they experienced when meeting with club members. One lady said that she now felt that she was among friends, even though she is new to the area!

The co-chairs reminded the group that five meetings are being planned, starting in November and ending in March, 2022, from 5 to 9 p.m. on the third Sunday of each month, and that membership is open to anyone interested in Scandinavia. Members are not required to have Scandinavian heritage … although most will agree that would be a wonderful attribute!

To further encourage return of the membership to pre-COVID-19 levels, the planning committee has decided to waive our (already modest) dues for the upcoming year! Members will only be responsible for the cost of their food. What a deal!

Please join us for good food, friendly discourse, and outstanding programs that have been a hallmark of the Scandinavian Club for 28 years! Ooftah, but you will enjoy this organization!