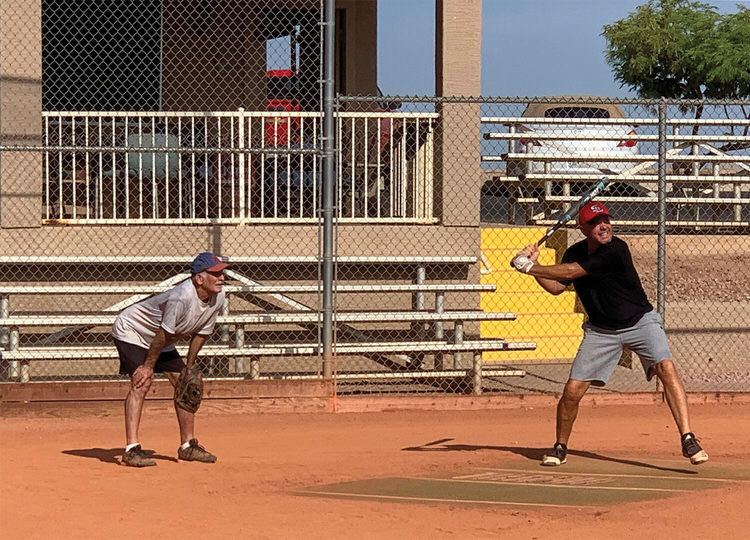 As we anxiously (and hopefully) look forward to cooler temperatures and our fall softball season, quite a few brave souls play throughout the entire summer at the Field of Dreams. We have a recreational program that never shuts down, even during the sizzlin’ days of our Arizona summers. The field is open on Mondays, Wednesdays, and Fridays for batting and fielding practice. Pick-up games are played every Tuesday, Thursday, and Saturday. Start times are at 8 a.m. in order to try to beat the heat. If you’re interested in getting in shape for the upcoming league play, now’s the time.

Most of our guys and gals have been playing some type of baseball or softball since their childhood. And they’ve kept on playing. Many had breaks due to work requirements or other priorities, like raising a family, but they came back for more. Today it’s estimated that more than 1.5 million seniors play in organized softball leagues throughout the U.S.A. What is it about the game that attracts so many senior participants? Well, there’s a whole list of reasons. First, there are numerous health benefits, including total body conditioning, increasing flexibility, and improving mental health and self-esteem. (Plus, there aren’t many opportunities for seniors to get outside and play in the dirt and grass, just like when you were a kid!) Second, there’s the competitive nature of the sport, both from a team standpoint as well as from an individual perspective. Third, and probably most importantly, there’s the camaraderie of the sport. Lifelong friendships are made on the softball field. And lastly, it’s lots of fun!

Baseball fun facts: Babe Ruth retired in 1935 with a record 714 home runs and 2,174 total runs scored. At the time of his retirement, Ruth’s teammate Lou Gehrig was second in career homers with 378, a little more than half of the Babe’s total. And guess who also finished his career with exactly 2,174 runs scored? It was none other than the man who would break the Babe’s home run record in 1974, Hammerin’ Hank Aaron!

Check out our website at www.sunlakessoftball.com for up-to-date news and more information about the Sun Lakes Senior Softball Association.