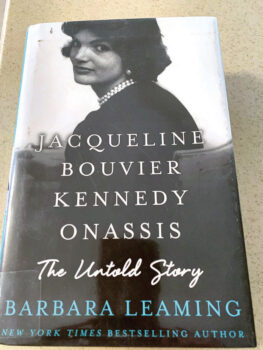 As we approach the 57th anniversary month of the assassination of John Kennedy in November, I thought it would be appropriate to review a recent biography of Jacqueline Kennedy. The subtitle, The Untold Story, reveals intimate details, conversations, and correspondence which the American public had not been privy to earlier. Author Leaming has captured Jackie’s thought processes and motivations for many of her actions following the assassination. Although not always presented in a flattering light, I found myself admiring her even more, yet with a deep sorrow for what she endured throughout her life, that the public was probably not aware of.

It was often difficult reading to discover that the lady we credit with holding the grieving nation together as the “staunch warrior” at President Kennedy’s funeral, suffered greatly for most of her life with what we now identify as PTSD. Although the terms “shell shock” and “combat fatigue” described soldiers from previous wars, it wasn’t until the 80s that the severity of PTSD was recognized. Today, advanced PTSD recognizes the terrifying inability to control the responses of body and mind to an ever-expanding network of triggers which traumatizes the sufferer anew.

The description of the assassination was the most graphic I have ever read, and perhaps that was intentional, so we could understand the full extent of the trauma Jackie experienced that day. In the days following the funeral, Jackie would relate relentlessly the graphic events of Nov. 22, 1963, to anyone who would listen, as she relived the scene repeatedly in her mind. Sadly, she did not seek counseling for many years until after the death of Robert Kennedy in June, 1968.

Jackie’s fall from grace with the American public came when she shocked the nation by marrying Aristotle Onassis in October, 1968. She went, as the author says, from being idealized to being stigmatized. When a close friend, Bunny Mellon, asked her point blank, “Why are you doing this?” Jackie answered, “I have no choice. They (the assassins) are playing Ten Little Indians, and I don’t want to be next.”

The years following her divorce tell of her life in New York, working at Viking Press in 1975 and later Doubleday, where she strove to earn the respect of her colleagues by working diligently to be accepted as a regular person with no special favors. As Onassis’ wife, she had known great wealth. As his widow, she waited in line at the office copy machines, made her own coffee, and did much of her own typing.

This biography is as much about world events as it is about Jackie. There is correspondence and conversations with prominent world leaders, especially during the tumultuous sixties, and insight into the people who fought for Jackie’s alliance as they pursued her for their own political ambitions. A 30-page bibliography lends much credibility to Ms. Leamings’ work.

Jackie’s comments in October 1980 perhaps best describes how she perceived the arc of her life. When British poet Stephen Spender asked her what she considered her greatest achievement, she said, “I think it is that after going through a rather difficult time, I consider myself comparatively sane. I am proud of that.”

Reviewer Violetta Armour, a Sun Lakes resident, is the former owner of Pages Book Store in Ahwatukee. She is the author of four novels, including the award-winning ‘I’ll Always Be With You.’ You can read other book reviews on her blog at serendipity-reflections.blogspot.com.