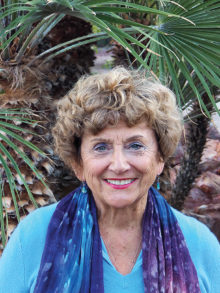 Reviewer Violetta Armour is a new resident of Sun Lakes from Ahwatukee where she owned the bookstore, Pages. She is the author of four novels, including award-winning I’ll Always Be with You, a book club favorite. Her books are available at the Robson, Chandler, and Phoenix libraries and on Amazon.

News of the World, by Paulette Jiles. Genre: Historical Fiction.

In this era of receiving news the instant it happens, often as it is happening, it’s hard to imagine how world news was received in small, isolated towns in the post-Civil War days.

Author Paulette Jiles takes us to a time and place in our country’s history, 1870, as we meet Captain Jefferson Kyle Kidd who reads the world’s news to rapt audiences while traveling the territories of north Texas. It’s a precious, long-gone time when news was a rare commodity, and an expert reader like Captain Kidd informed and entertained his eager crowds for a mere dime.

The captain is an honorable man and veteran of two wars. When he is offered a $50 reward for the return of a 10-year-old white girl who was captured by the Kiowa to her relatives 400 miles away, Kidd agrees to make the journey. Not for the reward, but because it seems the honorable thing to do.

Johanna is sullen, prone to running away, and mourns her Kiowa mother and her nomadic life. The Captain, while at times exasperated by his charge, is a tender-hearted man who does his best to protect her and ease her painful transition back into the “civilized” world.

Johanna, a hellion from the start, doesn’t speak English, eats with her hands, and knows how to use a revolver. When a group of Wichita Falls whores try to bathe her, the tub is turned on its side, dripping water into their receiving parlor while Johanna escapes no cleaner than she started.

So begins the journey for the Captain and Johanna, pure adventure in the wilds of untamed territory. When she is about to collect a white man’s scalp, the Captain explains, “This is considered very impolite and simply isn’t done.” She proves to be a fearless warrior, however, as they encounter violent weather, bandits, and Comanche raids. I thought, “Wow, this would be a great movie.” 20th Century Fox thinks so, too, and will release the film on Christmas Day, 2020, starring Tom Hanks.

The young girl and the older man develop a close bond and become trusting friends, creating both tenderness and underlying suspense as to what will happen when they must part.

Author Jiles, herself a rancher near San Antonio, is praised for building absorbing and authentic dramatic scenes. Her descriptions have the feel of truth, of a time and place brought vividly to life.

For me, as well as the absorbing adventure, the beauty of this book is that it gives evidence of the best and worst in human nature with the good prevailing.