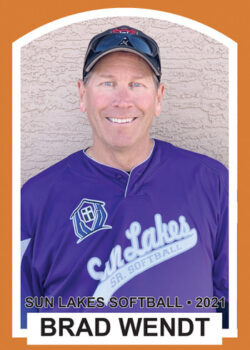 Where’s Brad? He’s not here; he went away. I bet Brad Wendt heard a lot of those corny jokes as a youngster. But as an adult, he actually “went” to a lot of places and did a lot of different things.

A native of Madison, Wisc., Brad graduated from Monona Grove High where he played basketball and baseball for the Silver Eagles. He was also a member of the ski club. He then played JV baseball at the University of Wisconsin before transferring to Arizona State University where he earned a BS in marketing.

Brad’s first job was as a beer and wine sales representative for the Zeb Pearce and Sons Company, a distributor of Coors products in Arizona. After three years with Pearce, he joined Alpha-Graphics as international operations manager. Alpha-Graphics has nearly 300 franchises throughout the U.S. and in many international locations. They provide printing and design services. It was with that company that Brad “went” many places. He was responsible for setting up new licensees and franchises, providing training, and helping franchisees get “up and running.” He traveled to many countries, including Australia, Canada, England, Russia, Sweden, and Turkey in that role. Additionally, he had a three-year assignment as general manager for three stores in Melbourne, Australia.

After eight-plus years with Alpha-Graphics, Brad joined his dad’s business, Design Concepts, a product design firm specializing in industrial design, engineering, and prototype services. Brad’s dad passed away soon thereafter, and Brad took over running the business. Under his leadership, the company grew from a small company with eleven employees to a mid-sized company employing over 45 engineers and designers. In 2008, he sold the company but retained the real estate. Today, he is “semi-retired” but owns and manages commercial real estate properties in Wisconsin and Alaska.

Baseball and softball have been a part of Brad’s life since Little League. He was primarily a catcher throughout his baseball career. He joined our Sun Lakes League last year and has been a “Top Ten” hitter and versatile fielder, adept at multiple positions.

Family is a big part of Brad’s life. All three of his and wife Pamela’s kids live in the Valley. There are currently three grandkids with one more on the way. Pamela will be retiring from the teaching profession this year, so they’ll have even more family time soon. A lot of their spare time now is spent with the grandkids. Grandson Austin plays club baseball, and granddaughter Clara is into the theatre, so there are a lot of functions to attend. Eight-year-old Avery likes swimming.

So, now if you ask where Brad “went,” it’d be to watch a grandkids’ activity!